Demonstrators in Ybor City call on Biden for help in Cuba

Activists are standing in solidarity with demonstrators in Cuba rallying against their communist government.

Earlier Wednesday, several local leaders spoke at Jose Marti Park to do the same. U.S. Rep. Kathy Castor called the situation in Cuba "a total collapse," pointing out that there are people there with no access to food, medicine, electricity, or internet.

She went on to call for a peaceful transfer of power in Cuba.

"The U.S. government should stand with the people of Cuba now to encourage and work towards that peaceful transfer of power," she offered.

"I stand in solidarity with my people and I wish for a free Cuba," agreed Hillsborough County Tax Collector Nancy Milan.

Milan’s parents are Cuban immigrants, and she still has family on the island.

"I can’t stress enough the dire need for necessities in Cuba right now," she added.

The rally came one day after a similar event spilled into busy roadways during Tuesday’s evening rush hour. Three people ended up being charged with resisting arrest later that night.

Two of those individuals -- 30-year-old Julian Rodriguez-Rodriguez and 39-year-old Maikel Vasquez-Pico -- were also charged with battery on a law enforcement officer. The third suspect was identified as 34-year-old Evelio Ramirez-Carrasco. 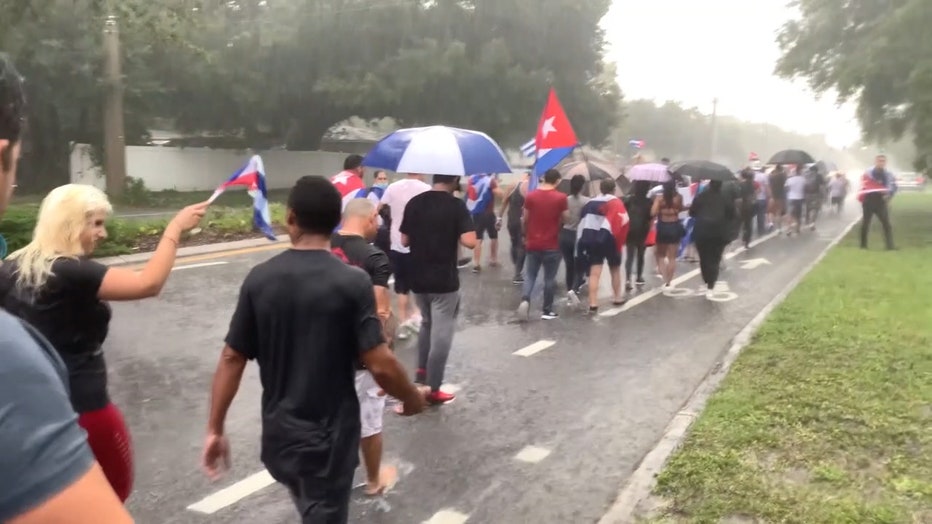 According to the Florida Highway Patrol, a trooper was hurt when a crowd of people tried to enter Interstate 275. Wednesday, FHP said the trooper suffered a broken ankle and lacerations to his arms and face while helping Tampa officers during an arrest.

Tuesday marked the third consecutive night of protests in Tampa. Demonstrators said they are making their voices heard on behalf of the people in Cuba and the economic crisis they are facing.

Tampa police said the protests started around 4 p.m. as a large group gathered at Al Lopez Park. There, the crowd, at first, remained on a sidewalk. About 30 minutes later, another group staged themselves in a northbound lane of Dale Mabry Highway at Columbus Drive, blocking the roadway.

About 45 minutes later, the group at Al Lopez Park began to block the roadway, police said. Just after 5 p.m., they began moving south on Himes Avenue to join those protesting at the busy Dale Mabry intersection. At one point, the group began chanting, "Where is Biden?" in frustration with the U.S. response to the island protests. 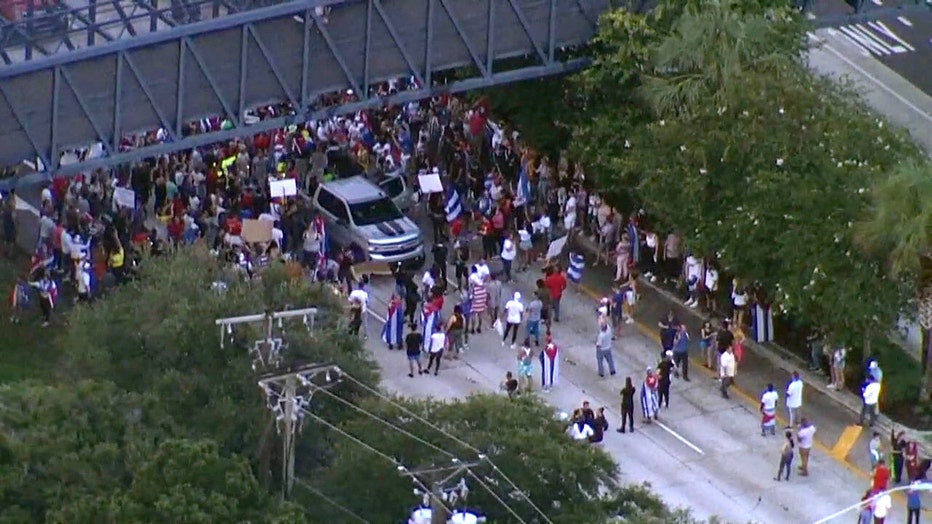 Police said they began ordering the large group to disperse before 6 p.m. but they turned and began marching south on Dale Mabry. Some demonstrators were in the roadway and some were in the median.

Before 7 p.m., the group tried to "take over" the I-275 northbound exit ramp at Dale Mabry, police said. Officers assisted FHP to redirect the protesters and that’s when several were taken into custody. This was around the time when a trooper was injured. He was taken to a nearby medical facility for treatment.

The group eventually moved off the exit ramp and remained at Dale Mabry, under an overpass. Police said additional dispersal orders were given. After 7:30 p.m., they began heading north on Dale Mabry. Part of the group diverted back to Al Lopez Park, but others continued marching on Dale Mabry.

The group at the park left after 9:30 p.m., police said. Overnight, some protesters remained at Dale Mabry Highway and Himes Avenue, but eventually left.

It wasn’t just in Tampa where protests took place. In Pasco County, protesters shut down U.S. 19 at Hollow Drive in Port Richey for part of the evening.

In Miami, dozens of people blocked traffic on the Palmetto Expressway on Tuesday. Others were seen walking between cars and waving Cuban flags. This week, the U.S. Coast Guard issued a warning against attempting to sail to Cuba with supplies.

On Tuesday, Gov. Ron DeSantis held a roundtable with elected officials, including members of Congress. The gathering at Miami’s American Museum of the Cuban Diaspora was closed to reporters, but the governor later asserted that protests in Cuba were more than just about shortages of vaccines, food, and other basic items. 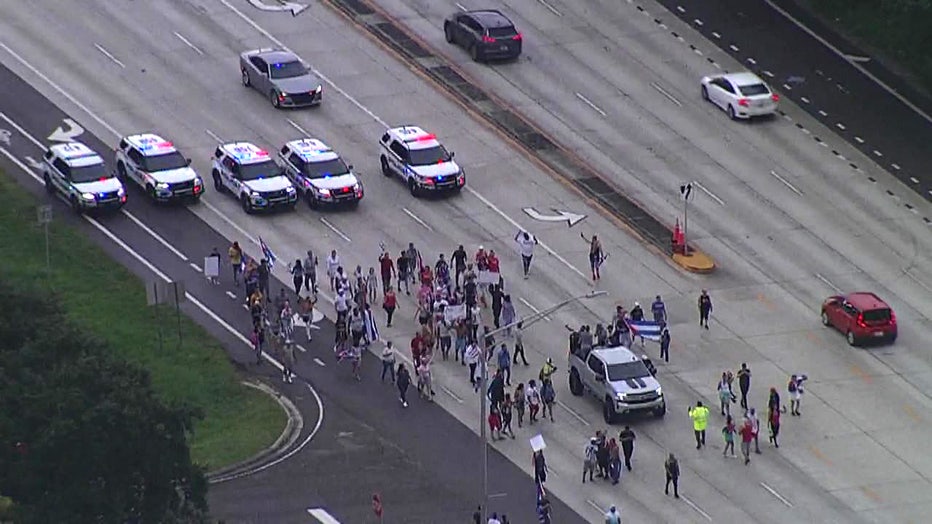 MORE: US Coast Guard warns people in Florida against boating back to Cuba with supplies to support protesters

In April, he signed his anti-riot bill into law which imposes harsher criminal penalties on violent protesters. The measure includes blocking a roadway during a demonstration. DeSantis proposed the bill after George Floyd's death last year, which sparked both protests and riots across the country.

When asked about the new law and the demonstrations in Florida, DeSantis said the protests here should not be compared with the protests in Cuba.

"I think that people understand the difference between going out and peacefully assembling, which is obviously people’s constitutional right, and attacking other people or burning down buildings or dragging people out of a car and doing that. They’re much different situations," he said. "What’s going on in Cuba, in particular, those are not just simply normal run-of-the-mill protests like we would see here in the United States. They don’t have freedoms respected there, whereas in the United States, you have a panoply of freedoms that are respected."

Cubans say the pandemic has pushed many to the breaking point. Thousands took to the streets there Sunday in one of biggest anti-government demonstrations in memory. South Florida is home to the largest U.S. population of Cuban Americans, but Tampa also has a history with Cuba going back generations.