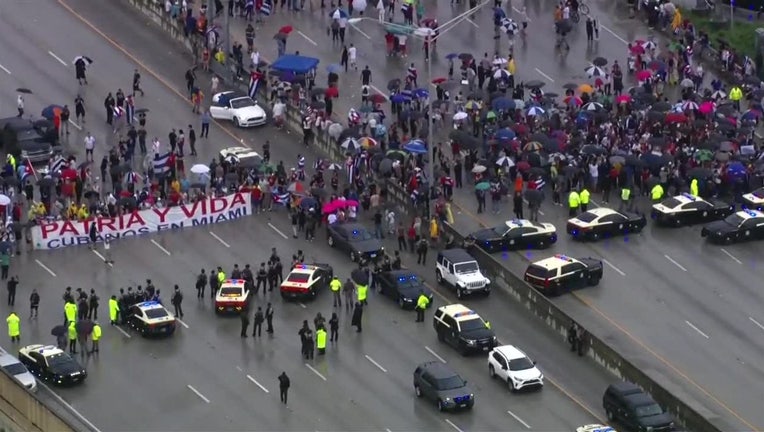 MIAMI - Demonstrators expressing solidarity with thousands of Cubans who waged a rare weekend of protests around their island nation shut down a major South Florida expressway for a time on Tuesday.

The large group of protesters gathered at a busy Miami intersection in support of the Cubans, who took to the streets of several communities around the communist nation on Sunday to air grievances over poor economic conditions, among other complaints.

South Florida is home to the largest U.S. population of Cuban Americans.

News helicopter footage from WTVJ showed a group of demonstrators in Miami make their way to the nearby Palmetto Expressway, where several of them sat down and began blocking traffic in one direction on the major divided highway.

The United States Coast Guard in Miami has been monitoring any activity aimed at increasing "unsafe and illegal" crossings between Florida and Cuba in response to rare street protests on the island.

Rear Adm. Eric C. Jones issued a warning statement Monday night as groups of Cuban immigrants said they planned to travel in boats filled with supplies to Cuba to show support for the Cuban protesters.

In Miami, Cuban social media personalities posted Monday that they would make the 10-hour boat ride to Cuba to show support after rare street protests broke out over the weekend, the Miami Herald reported. The influencers said they would bring aid — and guns — and urged people in Miami to offer up their boats.

RELATED: US Coast Guard warns people in Florida against boating back to Cuba with supplies to support protesters

The group didn't get very far on a rainy Monday night.

A few dozen demonstrators came together on Armenia Avenue to express frustrations over conditions in the Communist country, including internet outages in the country, resulting in many having trouble contacting their loved ones.

A message posted on organizer Santiago Rivera's Instagram account early Tuesday said the Coast Guard stopped his group from crossing the Florida Straits because of "problems with firearms." He promised they would try again to leave Wednesday morning "with the permission of the authorities of this country."

The Coast Guard statement suggested that such permission would not be forthcoming. It noted that the voyage is "dangerous and unforgiving," with nearly 20 Cubans dying while trying to cross in recent weeks. It said the Coast Guard is working with state, local and federal partners to monitor "unpermitted vessel departures from Florida to Cuba."

Rivera's post thanked people supporting the mission and said Cubans are determining their destiny and losing their fear. "This isn’t politics, this is brotherhood, this is humanity and common sense, proud to be cuban for my land I give my life," his post said.

Thousands of Cuban Americans also gathered in Little Havana over the weekend, expressing support for the Cubans who joined street marches against high prices and food shortages on the island. Such unsanctioned protests are extremely rare, and Cuban police were out in force on Monday to control them.

The last such demonstrations in Havana took place nearly 30 years ago, in 1994. President Miguel Díaz-Canel accusing Cuban Americans of using social media to egg them on.

Miami Mayor Francis Suarez, a Cuban American, tweeted that he has never "felt such raw emotion from the people of Miami desperate for intervention by the government and by themselves on behalf of Cuba." He added that "this is the moment of freedom" for Cuba.