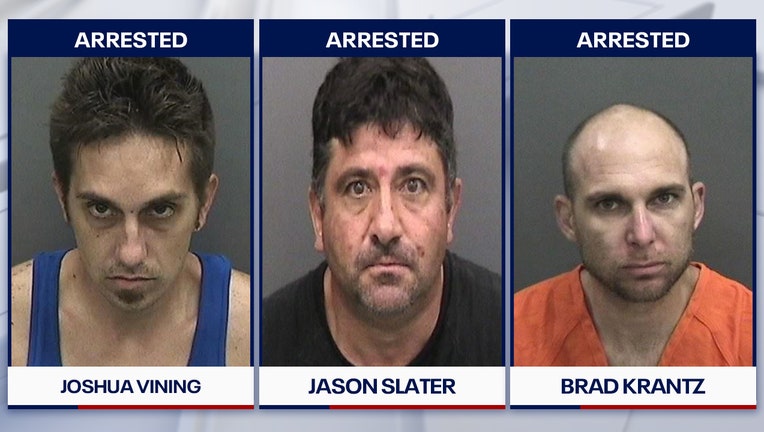 The agency said 36-year-old Joshua Vining and 46-year-old Jason Slater targeted businesses, primarily in Brandon, and one home. Detectives said they stole more than $13,000 in property, including electronics.

They said on June 23, Vining broke into a storage unit at the Brandon First Church of the Nazarene, and stole power tolls. A few days later, he broke into the Chopsticks Restaurant on East Brandon Boulevard, and stole cash and an iPad. Detectives said he was out on bond for previous burglary charges.

Detectives said Slater helped remove the stolen property or sold it to a local pawn shop. They said they worked with 34-year-old Brad Krantz, who was out on bond for an aggravated battery charge, to sell the items.

Detectives said they have identified some of the victims in the burglaries, but they hope the public can help identify others.

“Many of the items were taken from local businesses and others were stolen right off the porch of a residence in Hillsborough County,” said Sheriff Chad Chronister said in a statement. “These burglaries are even more intolerant, as the businesses targeted are already struggling due to the COVID-19 pandemic. We are hoping the public can help us return all of the stolen items to their rightful owners.”

Additional information, including the suspects' identities, are expected to be released during a Thursday morning press conference.