NFL legend Tom Brady officially announced his retirement in a statement on Instagram, thanking his Tampa Buccaneers teammates and coaches, as well as family and close friends who helped him along the way. The quarterback, considered by many to be the greatest player of all time, leaves the game with seven Super Bowl victories

TAMPA, Fla. - Tom Brady officially shared news of his retirement on Tuesday after winning seven Super Bowls during an unprecedented 22-year career, thanking many involved with the Tampa Bay Buccaneers organization in a lengthy Instagram post.

But some were quick to note how the legendary NFL quarterback’s announcement made no mention of the New England Patriots — where he spent his first 20 seasons and won six Super Bowls.

"This is difficult for me to write, but here it goes: I am not going to make that competitive commitment anymore," Brady, the most successful quarterback in NFL history, wrote in a nine-page post.

Brady went on to thank the Buccaneers organization, his teammates, ownership, general manager Jason Licht, coach Bruce Arians, his trainer Alex Guerrero, agents Don Yee and Steve Dubin and his family in the post. However, he didn’t mention the New England Patriots, where he spent two decades and served as the centerpiece of the Patriots’ dynasty, or owner Bob Kraft. 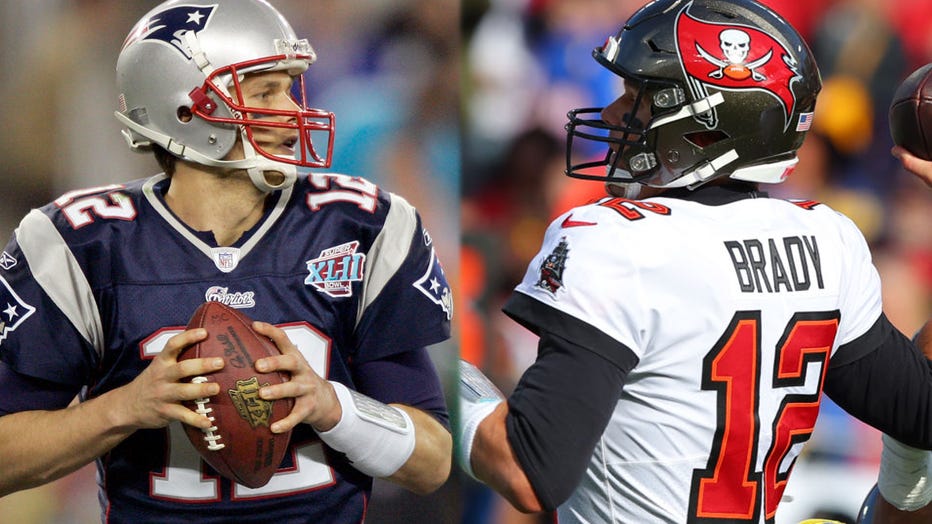 FILE IMAGES - (L) Patriots quarterback Tom Brady throws during the second quarter during the New York Giants game versus the New England Patriots in Super Bowl XLII, on Feb. 3, 2008, at The University of Phoenix Stadium in Glendale, Arizona. (Photo b

"First takeaway from Tom Brady's retirement statement: No mention of anyone with the Patriots," Ryan Hannable, a Patriots writer for local sports radio station WEEI, wrote on Twitter.

Mike Girardi, a Boston-based sports journalist and reporter for NFL Network, noted the same and called it "odd."

While it could simply be a coincidence, some also called attention to the fact that Brady used a photo in the announcement of him during the Oct. 3 Buccaneers game against the Patriots, in which the Bucs won 19-17.

But in March 2020, Brady previously shared similar heartfelt sentiments for the Patriots and coach Bill Belichick after he left the team to sign with the Buccaneers. At the time, he thanked all of his teammates, coaches, executives and staff, as well as the Kraft family "for the past twenty years of my life and the daily commitment to winning and creating a winning culture built on great values."

"Everything we have accomplished brings me great joy and the lessons I have learned will carry on with me forever," Brady said in part of his time with the Patriots back in 2020. "I couldn’t be the man I am today without the relationships you have allowed me to build with you. I have benefited from all you have given me. I cherished every opportunity I had to be a part of our team, and I love you all for that."

He also separately thanked the Patriots fans, calling Massachusetts his "home" for 20 years and noting how his children were all born and raised during his time there.

"You opened your heart to me, and I opened my heart to you. And Pats Nation will always be a part of me," he said at the time.

Brady became the starter at Michigan in 1998 and led the team to two bowl wins during the course of his collegiate career. He was then drafted in the sixth round by the Patriots in 2000. Brady spent 20 seasons with the team — becoming the enduring face of the Patriots during a run that included nine Super Bowl appearances, six of those as a champion.

Kraft issued a statement about Brady’s retirement, calling him "a privilege to watch" as the Patriots owner and "a dream come true" as a fan.

"I have the greatest respect for Tom personally and always will," Kraft said in part. "His humility, coupled with his drive and ambition, truly made him special. I will always feel a close bond to him and will always consider him an extension of my immediate family."

Kraft’s statement was later shared to Brady’s Instagram story, in which the legendary quarterback thanked the Patriots and fanbase, writing: "Beyond grateful and love you all."

Many others in the sports world soon reacted to the news, including NFL Commissioner Roger Goodell who said Brady would be remembered as "one of the greatest to ever play in the NFL."

Brady’s formal announcement came after weeks of speculation. It was reported over the weekend that he would retire, only for those reports to then be refuted by other claims that Brady hadn't yet made up his mind.

Bucs fans were left brokenhearted over the weekend as fans heard the rumors that Brady was retiring and may have played his last game at Raymond James Stadium. Many were desperate to hear from Brady himself but were met with silence, until Monday night when Brady finally spoke out on his podcast.

At the time, he still claimed he had not made any decisions about his future with the NFL. But hours later, he made the official announcement on Instagram — in which he reiterated his desire to spend more time with his wife, supermodel Gisele Bundchen, and three children.

"I have always believed the sport of football is an ‘all-in’ proposition — if a 100% competitive commitment isn't there, you won't succeed, and success is what I love so much about our game," Brady said in his Feb. 1 announcement. "I have tried my very best these past 22 years. There are no shortcuts to success on the field or in life."

He continued: "I have loved my NFL career, and now it is time to focus my time and energy on other things that require my attention."

This story was reported from Cincinnati. The Associated Press and FOX 13 Tampa Bay contributed.