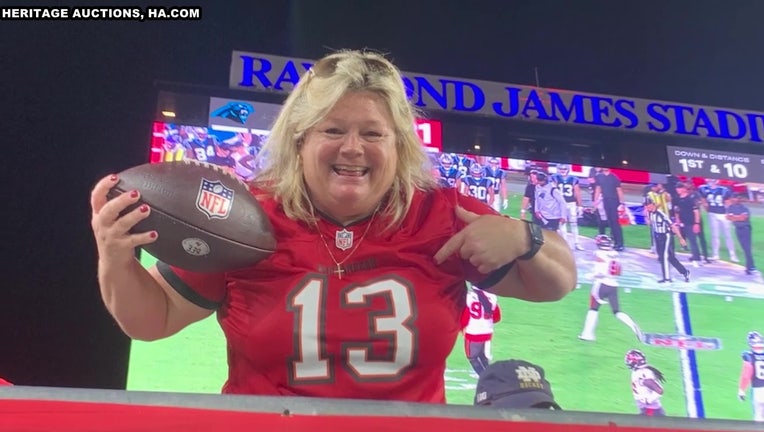 LAKELAND, Fla. - Tampa Bay Buccaneers quarterback Tom Brady tossed a dime to Mike Evans for his 624th touchdown during the final home season game against the Panthers. After that, a Lakeland woman was given that ball by Evans.

"It was just an incredible experience it was so exciting," Janice Greene, an occupational therapist from Lakeland, said.

It was even more exciting in February when Brady announced he was retiring after 22 seasons, making that ball one of the most valuable collectibles in the world. Greene got in touch with Heritage Auctions to sell the ball, but in March, Brady came out of retirement.

While Tampa Bay celebrated Brady's return, Green knew there was one drawback, the same one a man who secured Brady's final touchdown ball against the Rams.

"I had gone from this high thinking, it could be worth six figures to realizing it wasn’t going to be much at all," she said. "When I got that news, I literally got in my car and drove to the beach and watched the sunset and just sort of processed the whole thing," she said.

Green said she doesn't normally collect things and knew she had the memory of Evans giving her the ball, which is why she wanted to sell it. Even though the ball wasn't worth as much as she thought it would be, she decided to sell it.

The ball is up for auction now with a current bid of more than $6,000. While it isn't what she initially expected she said she still feels lucky.

"For me it was all about the experience of Mike bringing the ball to me and receiving that and knowing it came from Tom Brady. He’s just the GOAT!" she said.