"It makes you want to make sure everyone looks right. It's not just a small symbol. It's way bigger than that. It's a sign of life," said Evan Fruehauf.

Fruehauf is a USF graduate student. Twenty years ago he was a toddler, too young to understand the tragedy unfolding across our nation.

"I was 3 at the time. So I have no clue where I was and I think that even has more of a testament to it and it still has an impact on people’s lives as we get all these new people on campus – that many of us didn't even experience the events firsthand," he said.

Students and faculty at USF Sarasota-Manatee joined together and planted each flag as a remembrance.

"I don’t think it ever stops being as important, especially with everything going on the last year with pulling out of Afghanistan, and think about and reflect upon and honor those we lost on that day," said Fruehauf.

While many were just months old on September 11th, honoring those lives lost has become an important mission.

"You don’t want to think about them as a collaboration but each as individuals because they were a son of someone, a daughter; each had families," said Tiffany Lam, a USF student. 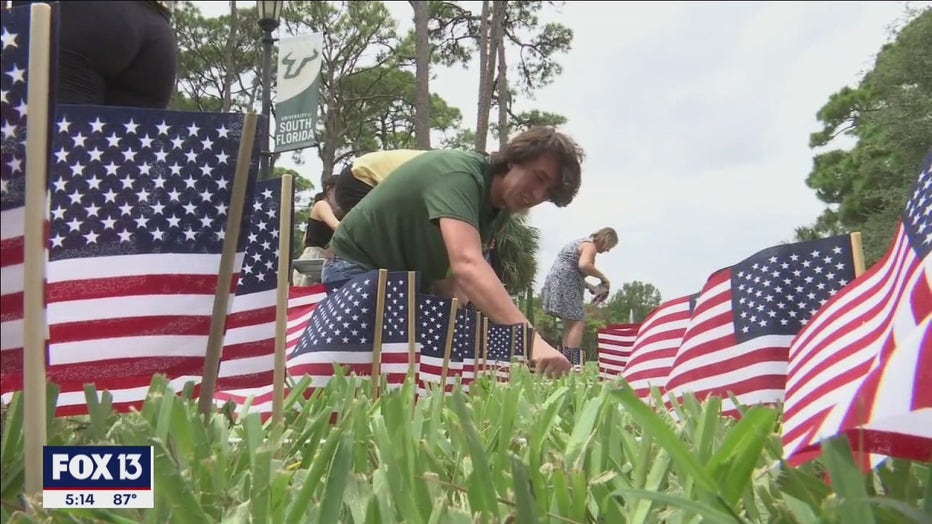 RELATED: 'America is under attack:' Bush was in Sarasota classroom when grim news came

For the last three years the USF Sarasota-Manatee campus has gathered to plant the flags. As future generations arrive, they take a moment to reflect.

"Everything that took place is something that 20 years ago we cannot forget. It’s something that changed our lives," said Carlos Moreira, the director of engagement, veteran success, and alumni affairs at USF.

On Friday, September 10 a ceremony will be held on the USF Sarasota-Manatee Campus to mark the 20th anniversary of the terror attacks. The ceremony will start at 8:15 a.m. with a flag-raising event.