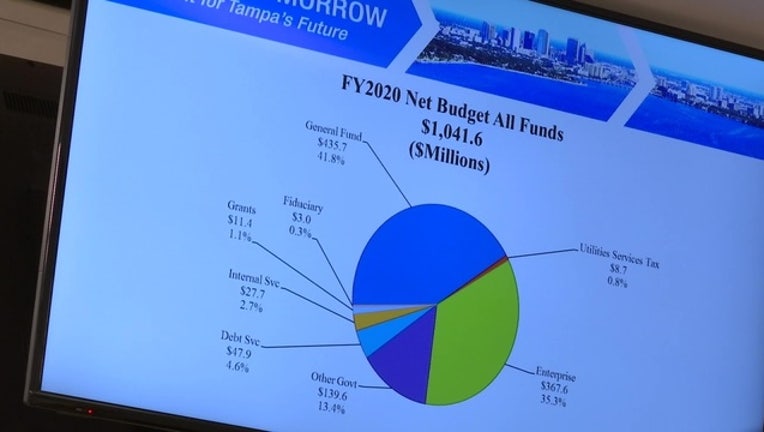 TAMPA, Fla. (FOX 13) - She used colorful graphs, and even cracked jokes about her concern those in the audience would fall asleep.

The pitch, which was for $1.04 billion, was slightly higher than the previous year's proposal by then-Mayor Bob Buckhorn.

"This year's budget theme is transforming Tampa's tomorrow, and it reflects the optimism we feel at the start of my administration," Mayor Castor said.

The pitch included $11.8-million for transportation capital improvements, and of the total, about $256 million has been set aside for police and fire rescue.

The mayor spent over an hour discussing the budget with council members, and also discussed that she wants to set aside just over $1-million to purchase 550 body cameras for police officers. The issue was one of her campaign promises: To provide law enforcement officers with the latest technology.

"I implemented that as a pilot program, and I don't know if there are any police officers who don't welcome that program and the transparency that it provides," the former chief said. "The issue has always been the price. So we have put that in the budget, and that's a big chunk, but it's an important program."

Castor says when preparing this budget, the biggest challenge was to do more with less.

"Through the years, we have cut," Castor said. "We're still recovering from the Great Recession, when we lost over 500 employees. So we have services and maintenance that's been deferred for years. And we're trying to catch up with that."

"It's such an important topic," Castor said. "We intend to approach it from two angles: One, we're going to have a sustainability and resilience officer, and that will be their sole focus. But we're going to look to ways to mitigate the effects of sea level rise, and how we as a community can reduce our carbon footprint."

The city has until October 1 to approve a balanced budget.