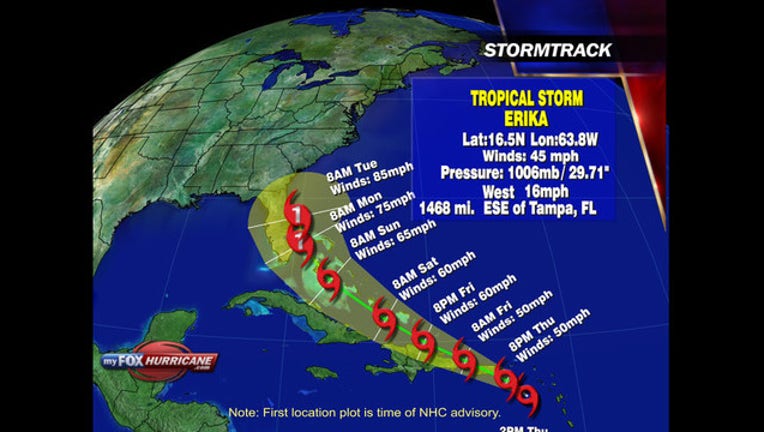 The storm, which forecasters said could reach Florida as a hurricane on Monday, dumped 15 inches (38 centimeters) of rain on the small island as it spun west toward Puerto Rico.

An elderly blind man and two children were killed when a mudslide crashed into their home in the southeast of the island, said Police Chief Daniel Carbon. Another man was found dead near his home in the capital of Roseau after a mudslide, but the cause of death could not be immediately determined, Carbon told The Associated Press.

Police said another 20 people have been reported missing.

"Erika has really, really visited us with a vengeance," Assistance Police Superintendent Claude Weekes said in a phone interview. "There are many fallen rocks and trees, and water. It's really chaotic."

He said crews are trying to reach isolated communities via the ocean because many roads and bridges are impassable.

"We're going to work throughout the night to see if we can get to the areas," he said. "There are people missing in different parts of the island."

Erika was centered about 135 miles (215 kilometers) south-southeast of San Juan, Puerto Rico as it picked up speed, moving west at 17 mph (28 kph) with maximum sustained winds of to 45 mph (75 kph), according to the U.S. National Hurricane Center in Miami.

Erika was expected to move near Puerto Rico and the Virgin Islands on Thursday and be near or just north of the Dominican Republic on Friday as it heads toward Florida early next week, possibly as a hurricane.

Chris Landsea, a meteorologist at the hurricane center, said the storm could dissipate if it passed over Hispaniola or Puerto Rico or it could strengthen and pose a potential threat to Florida next week. "The uncertainties are very high," he said.

As the storm entered the Caribbean, it did the heaviest damage to Dominica, an island of about 72,000 people of lush forests and steep terrain. Authorities were still conducting a full damage assessment after rivers surged over their banks and walls of mud surged into homes.

About 80 percent of the island was without electricity, and water supply was cut off, authorities said. Trees and light poles were strewn across streets as water rushed over parked cars and ripped the scaffolding off some buildings. The main airport was closed due to flooding, with water rushing over at least one small plane.

The main river that cuts through the capital overflowed its banks and surging water crashed into the principal bridge that leads into Roseau.

"The capital city is a wreck," policewoman Teesha Alfred said. "It is a sight to behold. It's a disaster."

Erika was likely to hit the island of Hispaniola, which is shared by Haiti and the Dominican Republic, said chief forecaster James Franklin at the National Hurricane Center.

"That would certainly not be good news for Hispaniola," he said. "They're very vulnerable to flooding. And even if Erika is a weak system that could be very bad there."

Officials shuttered schools, government offices and businesses across the region and warned of flash flooding because of dry conditions caused by the worst drought to hit the Caribbean in recent years. Authorities warned power and water service might be temporarily cut off.

"We're happy given the dry conditions, but it does highlight the need to be on alert," he said, adding that heavy downpours could lead to flash floods. He activated the National Guard as a precaution.

The storm is expected to hit Puerto Rico's southern region overnight and exit through the island's northwest. The storm's outer bands have already downed several trees and power lines across the island, and small landslides were reported. Garcia said schools and government offices would remain closed on Friday.

Erika is expected to dump between 4 to 8 inches (10 to 20 centimeters) of rain across the region, with up to 12 inches (31 centimeters) in some areas.

Dozens of flights were canceled in the region, and the U.S. Coast Guard closed all ports in Puerto Rico and the U.S. Virgin Islands.

Meanwhile in the Pacific, Ignacio strengthened into a hurricane. The storm's maximum sustained winds increased Thursday morning to 90 mph (150 kph).

Hurricane Ignacio was centered about 1,055 miles (1,700 kilometers) east-southeast of Hilo, Hawaii, and was moving west-northwest near 13 mph (20 kph).

Also in the Pacific, a new tropical storm formed Thursday morning. Tropical Storm Jimena had maximum sustained winds near 60 mph (95 kph) and was expected to strengthen to a hurricane by Friday. Jimena was centered about 925 miles (1,490 kilometers) southwest of the southern tip of Mexico's Baja California peninsula.