The US Department of Labor has filed a lawsuit against the owner of Peachtree City repair shop who paid a former employee his final paycheck in oil-soaked pennies dumped in his driveway with a vulgar note on top.

PEACHTREE CITY, Ga. - The US Department of Labor has filed a lawsuit against a Peachtree City auto repair shop owner who paid a former employee in pennies.

FOX 5 reported in March 2021 that a Fayetteville man was paid his final paycheck in tens of thousands of pennies.

"This is my final paycheck. Nine-hundred-fifteen dollars in pennies," Andreas Flaten said.

In March, he showed FOX 5 the wheelbarrow filled with more than 91,000 pennies. 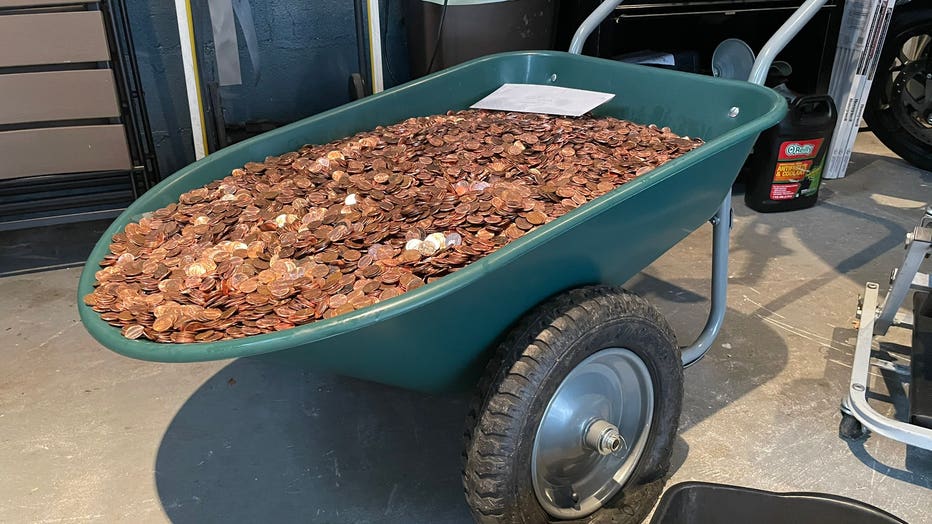 He said the pennies were covered in oil or grease, so he had to clean them off one by one.

On Wednesday, the US Department of Labor announced a lawsuit against Flaten's former employer, Miles Walker, who owns A OK Walker Autoworks in Peachtree City.

According to the complaint, Flaten contacted the Department of Labor in January 2021 about not getting his final paycheck after resigning from the auto shop.

The complaint alleges members of the DOL Wage and Hour Division contacted Walker about the accusation. He informed the department he would not pay Flaten's last paycheck.

The complaint then said Walker dumped the pennies on Flaten's driveway after learning he contacted the US DOL.

According to the department, Walker's actions are retaliation.

An employee has a right to understand what their rights are and to ensure they are being paid properly. Any time they inquire the employer, whether it be verbally or in writing or even contacting our office, that employee has a right to not be retaliated against or discriminated against," said Steven Salazar, the District Director with the US DOL Wage and Hour Division.

The lawsuit also said Walker included a note with an expletive on the pile of pennies, and posted also posted defamatory things about Flaten on the auto shop's website.

Salazar said Walker owes about $37,000 in back wages and liquidated damages.  He's also not keeping track of things required under the Fair Labor Standards Act.

"Recordkeeping, which means they're tracking the actual hours employees are working and making sure they're paying them in compliance with the minimum wage which is 7.25 an hour under federal law for all hours worked. Then overtime, premium pay for hours worked over 40 hours in a workweek. So without maintaining proper records, how is the employer expected to be paid properly?" Salazar said.

Salazar encourages people to speak up if they feel like they're not being treated fairly in the workplace.

"If they feel like when they're seeking to make sure their rights are being protected they feel like they're being retaliated against or even discharged from employment, reach out to us. There's no harm in making the phone call," he said

He also recommends employers reach out if they are not sure if they are following the requirements,

FOX 5 did reach out to Miles Walker but did not hear back.

Back in March, he told FOX 5 over the phone he paid Flaten in US currency and didn't want anything to do with this story.

The auto shop's website claims the business has received death threats, aggressive phone calls, and disturbing emails due to the situation.