WASHINGTON (AP) - Devastated by the coronavirus, the U.S. economy is sinking. And the plunge is accelerating.

Now, as some businesses in a few states start to trickle back to work, hopes are beginning to arise that the economy, damaged as it is, might be poised to rebound by the second half of the year. If more employees and consumers were to gradually return to working and spending, the idea goes, the economy might be able to mount a sharp comeback.

Yet most economists have the same response: Keep such expectations in check.

Among their concerns is that the coronavirus could flare up again after the economy is re-opened, forcing reopened businesses to shut down again. Another is that people — employees and consumers alike — will remain too wary of contracting the coronavirus to return to anything resembling normal economic behavior. If that were the case, no meaningful economic recovery would likely take hold.

“The virus has done a lot of damage to the economy, and there is just so much uncertainty now,” said Mark Zandi, chief economist at Moody’s Analytics.

The U.S. economy shrank at a 4.8% annual rate in the January-March quarter, the government estimated Wednesday, as the coronavirus pandemic shut down much of the country and began triggering a recession that will end the longest expansion on record.

Yet the drop in the first quarter will be only a precursor of a far grimmer report to come on the current April-June period, with business shutdowns and layoffs striking with devastating force. With much of the economy paralyzed, the Congressional Budget Office has estimated that economic activity will plunge this quarter at a 40% annual rate.

That would be, by a breathtaking margin, the bleakest quarter since such records were first compiled in 1947. It would be four times the size of the worst quarterly contraction on record set in 1958.

The Commerce Department said that the gross domestic product, the total output of goods and services, posted a quarterly drop for the first time in six years. And it was the sharpest fall since the economy shrank at an 8.4% annual rate in the fourth quarter of 2008 in the depths of the Great Recession.

Daco predicted that the recession will cause a drop in output that will be three times the size of the economic decline during the Great Recession, which got that name because it was the worst economic slump since the Great Depression of the 1930s.

Zandi said he thought any prospects for a recovery will hinge on the eventual availability of a coronavirus vaccine. He doesn't expect the economy to regain its footing on a sustained basis until perhaps mid-2021 — and that assumes that a vaccine would be ready for use by then.

“I would characterize this period as going through quicksand until we get a vaccine,” Zandi said.

In just a few weeks since mid-March, businesses across the country have shut down and laid off tens of millions of workers. Factories and stores are shuttered. Home sales are falling. Households are slashing spending. Consumer confidence is sinking.

The GDP report showed that the weakness was led by plummeting consumer spending, which accounts for 70% of economic activity. Consumer spending tumbled at an annual rate of 7.6% in the first quarter — its steepest decline since 1980. Business investment sank 8.6%, with investment in equipment falling 15.2%.

The Commerce Department's report was its first estimate of GDP for the January-March quarter. It will issue two updated estimates in the coming weeks.

As the economy slides into what looks like a severe recession, the Trump administration continues to promote the notion that a recovery will arrive quickly and robustly once the health crisis has been solved — what some call a V-shaped recovery.

But economists suggest that many Americans could remain too fearful to travel, shop at stores or visit restaurants or movie theaters anywhere near as much as they used to. In addition, local and state officials may continue to limit, for health reasons, how many people may congregate in such places at any one time, thereby making it difficult for many businesses to survive. It’s why some economists say the damage from the downturn could persist far longer than some may assume. 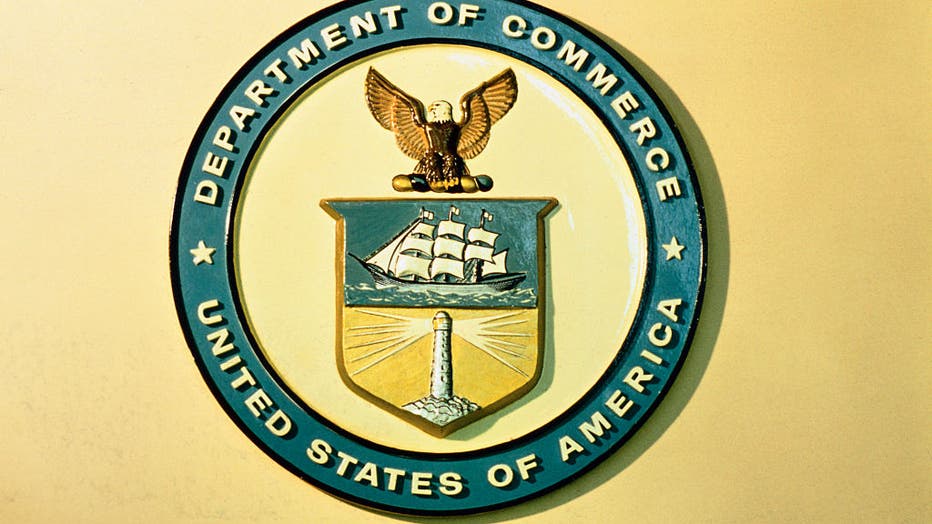 (Original Caption) Photo shows the seal of the U. S. Department of Commerce.

The Trump administration takes a rosier view. President Donald Trump told reporters this week that he expects a “big rise” in GDP in the third quarter, followed by an “incredible fourth quarter, and you’re going to have an incredible next year.”

The president is building his re-election campaign on the argument that he built a powerful economy over the past three years and can do so again after the health crisis has been resolved.

For now, tens of millions of U.S. businesses and laid-off or furloughed workers are hoping for a swift and solid economic rebound. Among them is Edward Morris, the president of P/A Industries Inc., a small manufacturing firm in Bloomfield, Connecticut, with 45 workers that makes machines for metal forming companies. Morris said so far he's been able to keep all of his workers employed, though he fears what will happen when his current order backlog runs out in a few weeks.

“Starting last week, orders dropped off a cliff,” he said.

Morris said he has applied for a loan from the Small Business Administration but is concerned about what will happen to his workers once that money runs out.

Andrew Kashian, owner of Story Time Chess, a small company in New York City that sells chess sets that can be used to teach young children to play the game, is among the companies that have actually seen sales jump during the shutdown.

“We are selling anywhere from 100 to 300 chess sets a day through our website,” Kashian said.

He attributes the surge in demand to desperate parents searching for ways to entertain children who are out of school.

“They want to find an activity that is actually productive,” Kashian said.