Herd immunity doesn’t make any one person immune, and outbreaks can still pop up.

The concept of "herd immunity" has been a goal since the onset of the pandemic. The term describes when enough people have immunity against COVID-19 — either from vaccination or a past infection — to stop the uncontrolled spread.

But in recent days, U.S. health officials and the White House have shifted away from setting a target percentage for the U.S. to reach herd immunity, and instead are focusing on getting as many vaccines into arms as possible amid sagging demand. Doing so will help lower virus cases, and in turn, restore a more recognizable normal for Americans, experts say.

In fact, many infectious disease researchers don’t expect the coronavirus to be eradicated anytime soon and instead are optimistic about a future with it continuing to circulate but posing much less of a societal threat.

"The best thing, of course, is if we could eliminate coronavirus from the globe and there’s not a chance that that’s going to happen anytime soon," said Dr. Amber D’Souza, an infectious disease epidemiologist at Johns Hopkins Bloomberg School of Public Health. 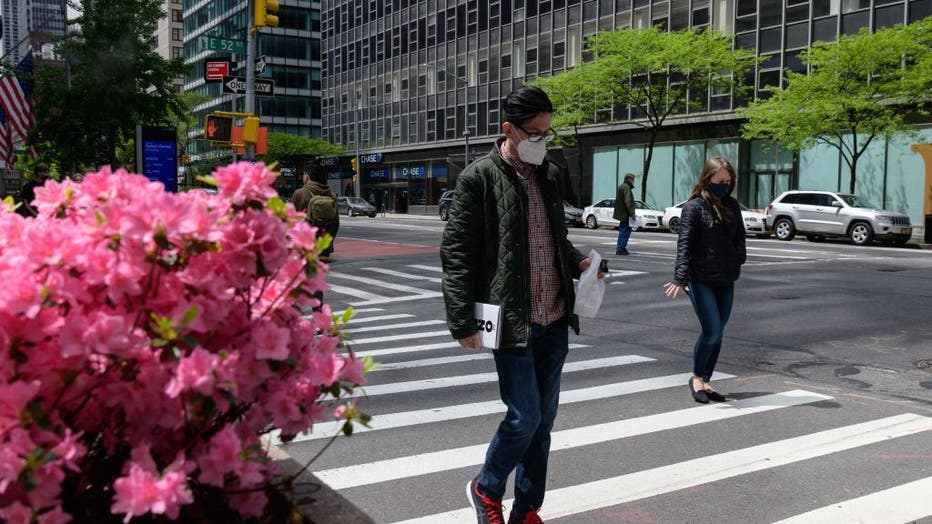 FILE - People walk past office buildings in midtown Manhattan on May 7, 2021 in New York City. (Photo by ANGELA WEISS/AFP via Getty Images)

Herd immunity doesn’t make any one person immune. It’s not an on and off switch, and outbreaks still flare-up. It means the virus is no longer easily jumping from person to person.

"Herd immunity, the way I think about it, is that it is more of a mathematical concept and less of what people will actually be impacted by," said Spencer Fox, the associate director of The University of Texas COVID-19 modeling consortium.

Fox said the question of when the U.S. will reach herd immunity remains unclear because we don’t know how long immunity lasts from natural infection or the vaccines. We also don’t know how quickly the virus will evolve in the future.

"When we start thinking about more long-term dynamics, those factors become really important because we could potentially hit herd immunity to a point where the epidemic becomes under control — but then the virus evolves enough to evade immunity so that it becomes a problem again," he added.

What complicates the concept of herd immunity, and the necessary threshold to reach it, is the emergence of more contagious coronavirus variants and vaccine hesitancy. Polling has shown that U.S. resistance to getting a COVID-19 vaccine is slowly dropping but still remains high. One recent survey found that nearly a quarter of adults still say they don’t plan to get vaccinated.

A monthly survey of more than a million U.S. Facebook users and analyzed by the University of Pittsburgh and Carnegie Mellon University scientists found that those who are hesitant cited concerns about side effects, distrust in government or simply believing they don’t need the vaccine.

Children, who make up about one-fourth of the U.S. population, have not yet been cleared for the vaccine. But teens 12 and older could become eligible to receive the Pfizer-BioNTech shot by next week, according to the Associated Press. Still, parental vaccine hesitancy also remains a challenge with 23% of parents surveyed by the Kaiser Family Foundation saying they will definitely not get their child immunized against COVID-19.

It remains unclear what the exact herd immunity threshold is for the coronavirus. Last year, many epidemiologists estimated somewhere between 60% to 70%, but that percentage now seems to be higher.

News reports have circulated recently about the U.S. being unlikely to reach herd immunity. But Dr. Ashish Jha, dean of the Brown University School of Public Health, said "this is not tragic," in response to the notion.

Jha recently took to Twitter to stress that although the threshold for herd immunity seems to be higher than previously thought, it’s possible we might get there. Improving access to vaccines and opening up the shots to children will help put the country toward that higher percentage, he said.

But Jha also stressed that "it’s not like we hit 80% and disease disappears."

"We'll need to monitor variants, vaccinate the world, continue testing, etc," he wrote Monday in a thread. "But this is all manageable. We'll settle into a new equilibrium as we do with many viruses and COVID won't dominate our lives. And that's what matters."

Dr. Dave Chokshi, New York City’s health commissioner, also referred to recent news coverage about herd immunity during a briefing this week. He said that while it’s "significantly less likely" that we’ll reach "the formal epidemiological definition of herd immunity" — the country will still have major benefits from continuing its vaccination drive.

To date, at least 57% of American adults have received at least one dose of a vaccine, and nearly 42% are fully vaccinated, data from the Centers for Disease Control and Prevention shows.

The Biden administration is in a "new phase" as it seeks to make it easier for people to get shots amid waning demand. The president also called for states to make vaccines available on a walk-in basis and said he will direct all federal pharmacy partners to do the same.

President Joe Biden this week announced a new target of 70% of American adults receiving at least one dose of a COVID-19 vaccine, and 160 million fully vaccinated, by the Fourth of July.

"I really think there’s a lot of hope, and the question is what happens over these next few months. Really during the summer, what is our progress with vaccination?" D’Souza said. "This is now a continuing battle, and I am optimistic."