Indian authorities said 44 tons of liquid oxygen was being delivered by rail to Mumbai on April 26, as the country’s hospitals grappled with rising COVID-19 cases.

Amid a recent surge of COVID-19 cases in India, President Joe Biden has vowed to assist the country and provide much-needed supplies such as oxygen, diagnostic tests, treatments, ventilators and personal protective equipment.

"Just as India sent assistance to the United States as our hospitals were strained early in the pandemic, we are determined to help India in its time of need," Biden tweeted on Sunday.

India on Monday set another record for new coronavirus infections for the fifth day in a row at more than 350,000. The country reported 2,812 more deaths, with roughly 117 Indians succumbing to the disease every hour — and experts say even those figures are probably an undercount. The new infections brought India’s total cases to more than 17.3 million, behind only the U.S.

RELATED: US to share millions of AstraZeneca COVID-19 vaccine doses with world after federal safety review

Also on Monday, the head of the World Health Organization called the surge in COVID-19 cases in India "beyond heartbreaking" and says the U.N. agency has sent critical supplies to the country, including thousands of portable oxygen machines.

At a press briefing, WHO director-general Tedros Adhanom Ghebreyesus said the pandemic "continues to intensify" globally and that coronavirus infections have now risen for the ninth straight week, while deaths have increased for the sixth week in a row.

"There were as many cases globally last week as in the first five months of the pandemic," he said.

RELATED: N95 masks don't have to be rationed, reused anymore in US hospitals amid plentiful supply, FDA says 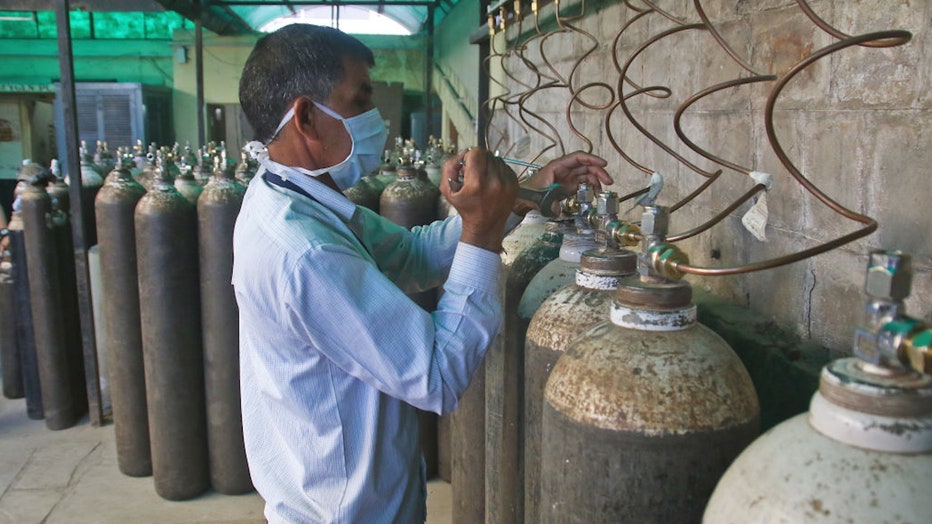 FILE - A worker fit medical oxygen cylinders to an Oxygen plant, amid a surge in coronavirus cases, at Sawai Mansingh Hospital, in Jaipur, Rajasthan, India, on April 26, 2021. (Vishal Bhatnagar/NurPhoto via Getty Images)

To address the crisis in India, Tedros said WHO has redeployed more than 2,000 staff to support the country’s response on the ground and is helping authorities with efforts including vaccination. Among the supplies WHO has sent India are pre-made mobile field hospitals and lab supplies, he said.

In addition to supplies of oxygen running out, intensive care units are full and nearly all ventilators are in use. As the death toll mounts, the night skies in some Indian cities glow from the funeral pyres, as crematories are overwhelmed and bodies are burned in the open air.

The deepening crisis stands in contrast to the improving picture in wealthier nations like the U.S., Britain and Israel, which have vaccinated relatively large shares of their population and have seen deaths and infections plummet since winter. India has four times the population of the U.S. but on Monday had 11 times as many new infections.

Apple CEO Tim Cook tweeted on Monday that the company will also be "donating to support and relief efforts on the ground."

Germany’s Health Ministry said it is urgently working to put together an aid package for India consisting of ventilators, monoclonal antibodies, the drug remdesivir, as well as surgical and N95 protective masks.

In January, India’s leaders were loud and proud after declaring victory over the virus during a virtual World Economic Forum.

And despite leaders proclaiming India was "in the endgame" of the pandemic, the patients arriving at hospitals were far sicker and younger than previously seen, prompting warnings by health experts that India was sitting on a ticking time bomb.

"Many people across India are paying with their lives for that shameful behavior by political leaders," Krishna Udayakumar, founding director of the Duke Global Health Innovation Center at Duke University, said.

In a radio address on Sunday, India’s Prime Minister Narendra Modi sought to deflect the criticism over what he called a "storm" of infections that had left the country "shaken."

RELATED: India's capital to lock down amid devastating coronavirus surge

"It is true that many people are getting infected with corona," he said. "But the number of people recovering from corona is equally high.

"India's government said last week it would expand its vaccination program to make all adults eligible, something long urged by health experts.

But vaccinations take time to show their effect on the numbers of new infections, and there are questions of whether manufacturers will be able to keep up with the demand. The pace of vaccination across the country also appears to be struggling.

The Associated Press and Storyful contributed to this report.