TAMPA, Fla. - University of South Florida assistant men's basketball coach Tom Herrion is out of a job after an investigation substantiated comments he made that either toed the racial line – or went over it.

In 23 pages, Lightfoot Sports Law of Birmingham, Alabama, which was hired by USF, detailed the three-month investigation that involved interviews with 17 members of the program.

Three comments were substantiated, including one where Tom Herrion saw a player wearing a sweatshirt supporting historically Black colleges and he asked, "What's up with all that Black [expletive]? I thought you were [redacted]."

He also told a player to, "run like the police were chasing him." 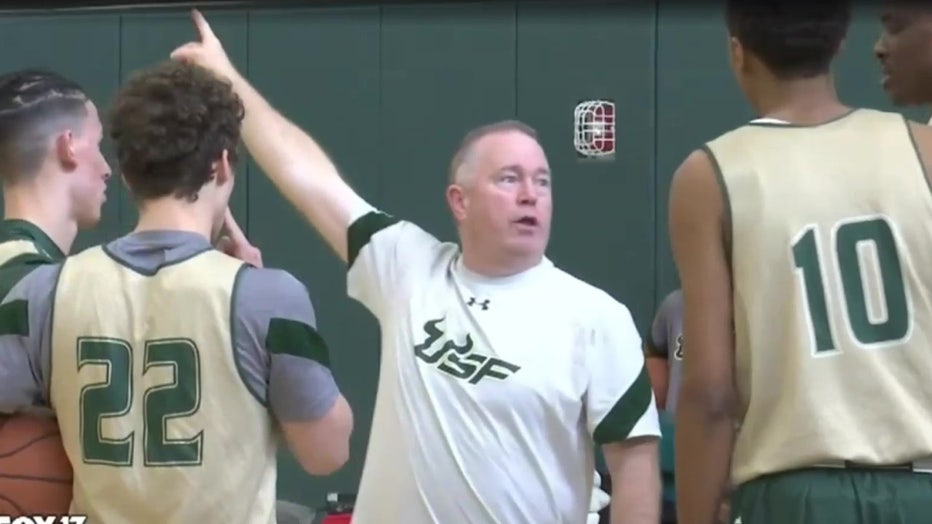 Following the review, USF Vice President of Athletics Michael Kelly has decided not to renew Herrion’s contract and Herrion is no longer with the program.

"It is highly disappointing that the review confirmed isolated actions involving Coach Herrion’s interactions with student-athletes that are simply unacceptable," Kelly said.

The University of South Florida Bulls men's basketball assistant coach Tom Herrion has been placed on administrative leave after what the school calls 'troubling concerns' regarding an alleged racist comment.

In the report, Herrion denied making the remark about Black colleges.

On the "running from the police" comment, he said he made it because he knew the player had briefly been in trouble, years before.

The report also found that those two remarks constituted misconduct, but that while they were "grossly tone-deaf," Herrion did not violate the school's diversity rules, which call for patterns of harassment.

The NAACP of Hillsborough County wants those rules toughened up.

"It is not strong enough to protect the vulnerable," said NAACP President Yvette Lewis.

The report says, "there is essentially no evidence that Coach Gregory or his staff failed to address a known racial problem."

"On-the-court product aside, you have to make sure you are doing the right things off the court, and I know Brian Gregory has harped on this his four years, to make it a family," said Nathan Bond, the managing editor of thedailystampede.com, USF's SBNation website.

The report also looked into why nine players transferred from the team after last season. The report indicates two of them said it was because of the alleged racial discord.

The athletic director was not available for an interview Tuesday but the school said he might be later on this summer.