Chip dives to the memorial

Chip Brewster pays a visit to the new Circle of Heroes memorial off the coast of Pinellas County.

CLEARWATER, Fla. - A new monument is dedicated to veterans of the United States military, but you have to head underwater to see it.

Ten miles off the coast of Pinellas County is where Narcosis Scuba Center will bring you to dive underneath the Gulf’s surface – and pay a peaceful tribute. Forty feet underwater, at the end of an anchored line, you’ll find statues representing the men and woman who served our country.

There are 12 statues, each 6 feet tall. A second phase will add additional statues to the site in 2020 to complete the circle.

ONE TANK TRIP: The Circle of Heroes

Narcosis runs several day trips, including fishing, but this one is quite special.

“This is the nation’s first underwater memorial,” explained Shawn Campbell, a dive master at the center, based in Tarpon Springs. “We’ve been taking a lot of veterans, and people who just want to come down, pay respect and have a real love for the water. It’s a really cool opportunity.” 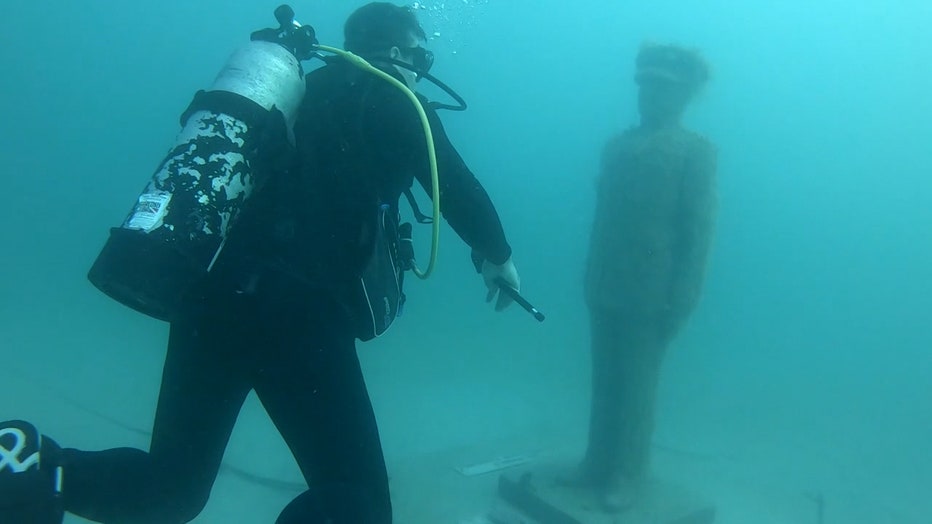 “When you’re seeing a memorial in complete solitude of it being in the water – it’s a completely different immersion,” he said. “You can sit there and you can see a statue all you want and you can be with a group of people, but once you’re in the water – you can be around people – you’re still by yourself. You can sit there and really take it in.”

Campbell’s name is on the Iraq veteran statue. He didn’t know it had been placed there.

“As a combat veteran myself, I have a lot of family and friends in the military. It does mean a lot – for me and the people who didn’t make it back,” he explained.

The whole project of having the Circle of Heroes memorial come to life was the brainchild of Dr. Heyward Matthews.

“The first inspiration was when I got some underwater art photographs from down the Caribbean and saw a circle of statues,” he told FOX 13. “It seemed like a really good idea – also because of divers, when you go down, if you’ve got a circle you can go all the way around and come back to your starting point.”

Ten miles off the coast of Pinellas County is where Narcosis Scuba Center will bring you to dive underneath the Gulf’s surface – and pay a peaceful tribute.

“It’s really a way to say ‘Thank you’ to our veterans,” Matthews added.