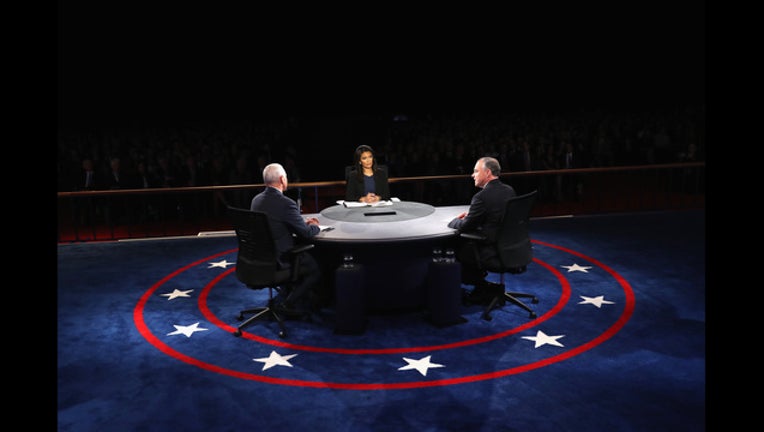 WASHINGTON (AP) - Republican Mike Pence was calm and steady in the face of Democrat Tim Kaine's fiery and frequent challenges. But when it came to defending Donald Trump, Pence dodged, sidestepped or was silent about some of his running mate's most provocative words.

"I can't imagine how Governor Pence can defend the insult-driven, me-first style of Donald Trump," said Kaine, the Virginia senator and Hillary Clinton's No. 2.

The usually easygoing Kaine went on the attack from the start and seemed determined to make the debate a referendum on whether Trump has the disposition for the Oval Office. He slammed Trump for having called women pigs and slobs, and condemned the GOP nominee's praise of Russian President Vladimir Putin.

Pence frequently avoided taking the bait -- a shrewd move for a conservative darling who could have eyes on the Oval Office himself if Trump loses in November. But for voters seeking assurances from Pence about Trump's temperament, there was little to cling to.

Five weeks from Election Day, the White House race appears to be tipping in Clinton's favor. She was widely viewed as the winner of last week's first presidential debate, rattling the real estate mogul with jabs about his business record, responding to his attacks with calm rejoinders, and sending him into a multi-day tailspin over comments he made about a beauty queen's weight 20 years ago. New public opinion polls have shown her improving her standing in nearly all battleground states.

Pence was markedly more prepared and more detailed in his answers than Trump was on the debate stage. He was also more consistent in painting the Democratic ticket as career politicians unwilling to shake up Washington.

"Hillary Clinton and Tim Kaine want more of the same," Pence said. He repeatedly accused the Democrats of running an insult-filled campaign -- an ironic attack line given that Trump has leveled repeated insults against Clinton and his former rivals in the Republican primaries.

Republicans hope Pence's performance will help steady Trump's campaign. But that boost could be short-lived if Trump has another weak performance when he and Clinton meet Sunday in their second of three debates.

Trump is sure to be peppered with questions in the next debate about his tax records, as Pence was Tuesday. Asked about reports that the businessman might not have paid any federal taxes for years, Pence said his running mate "used the tax code just the way it's supposed to be used, and he did it brilliantly."

Records obtained by The New York Times showed Trump suffered more than $900 million in losses in 1995 that could have allowed him to avoid paying federal income taxes for as many as 18 years.

Kaine, too, defended his running mate's weaknesses, chiefly the public's questions about her honesty and trustworthiness. He said that while Trump was "selfish," Clinton had devoted her career to helping children and families.

Social issues were a bigger part of the conversation than in the first presidential showdown, reflecting both candidates' religious faith.

Kaine, a Catholic who personally opposes abortion but has consistently voted in favor of abortion rights, said of the Republican nominee, "Why doesn't Donald Trump trust women to make this choice for themselves?" He also pointed to Trump's assertion that women should face some kind of "punishment" for abortion, a comment Trump later walked back.

Pence stressed his opposition to abortion and said he was "proud to be standing with Donald Trump" on the issue.

"The weak and feckless foreign policy of Hillary Clinton and Barack Obama has awaked an aggression in Russia that first appeared in Russia a few years ago," Pence said. "All the while, all we do is fold our arms and say we're not having talks anymore."

On criminal justice, Kaine argued that Trump's embrace of "stop-and-frisk" style policing was a mistake. Pence argued that Clinton has used police shootings to argue that there is "implicit bias" in police departments, and he said the Democrats should "stop seizing on these moments of tragedy."

Kaine quickly shot back, "I can't believe you are defending the position that there's no bias."