LONGBOAT KEY, Fla. - On Sarasota Bay, boaters are encountering a stinky situation.  "I would not want to swim in these waters," one woman said. "The stench is very strong."

On top of the water, a byproduct believed to be linked to millions of gallons of a wastewater spill from the Town of Longboat Key.

"Having been here since ’81, I’ve seen the fish degrade,” said Rusty Chinnis, Longboat Key resident. “For people who come up now, this is the new normal for them, this is all they’ve ever experienced.” He found out about the spill on Tuesday. 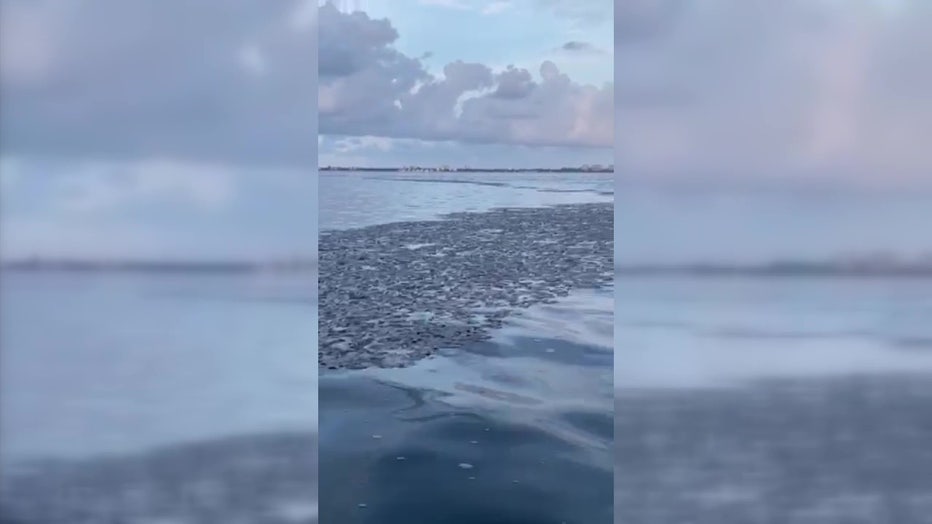 According to the Department of Environmental Protection 26 to 28 million gallons of wastewater spilled from June 17-30.

The DEP said it was only notified about the spill on Tuesday. In a statement, Longboat Key Town Manager Tom Harmer said that's when they found out.

"The break occurred within a section of pipe located on undeveloped land leading to the wastewater treatment facility, (not within the portion of the pipe located beneath Sarasota Bay). Initially, the town and Manatee County Utilities staff believed there may have been meter and equipment issues causing anomalous flow readings.  Not until June 29 did they determine there was an actual leak in the pipeline." 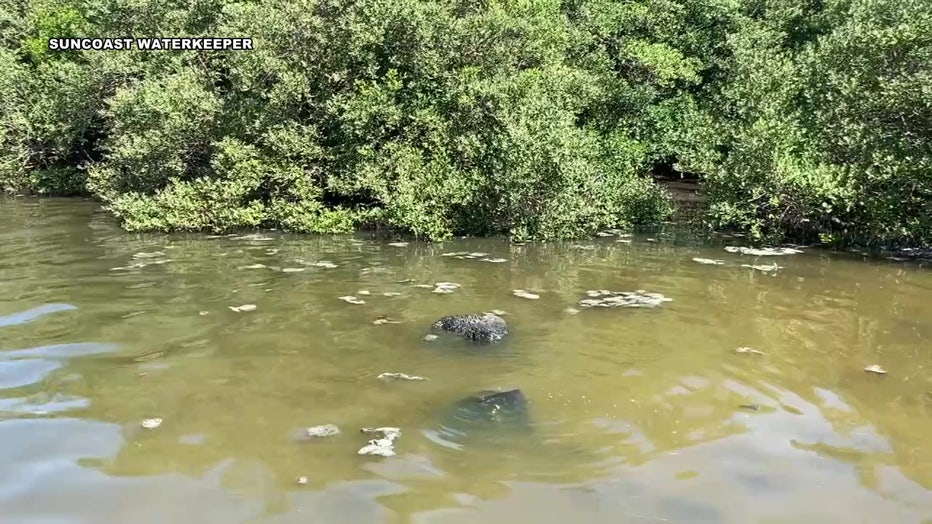 The leak happened in an underwater pipe near Longbar Pointe. It's the only way to transport sewage from Longboat Key to the Manatee County Wastewater Treatment Facility.

"I have great concerns because that pipeline comes across all over Sarasota Bay and we need to make sure we don’t have any potential issues in the future," said Chinnis. 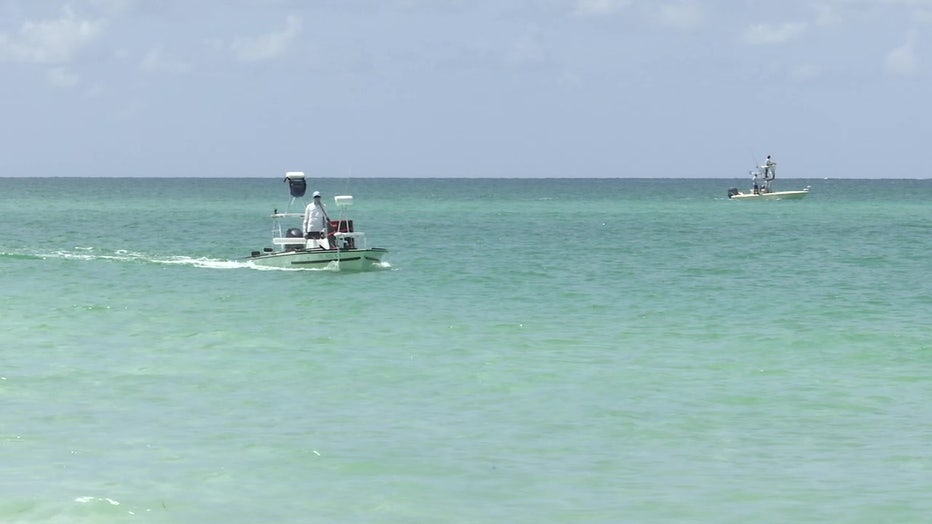 Suncoast Waterkeepers collected water samples and took drone footage of the site. It happened about 100 yards from the shoreline in the mangroves.

"This is an area of Sarasota Bay that we have been fighting to protect for many years," said Justin Bloom, Suncoast Waterkeepers founder.

Bloom worries about the impacts of the spill on humans and the Bay. "Raw sewage that came out of this pipe contains dangerous pathogens and other pollutants, it can create waterborne illness if people come in contact with it," he said. 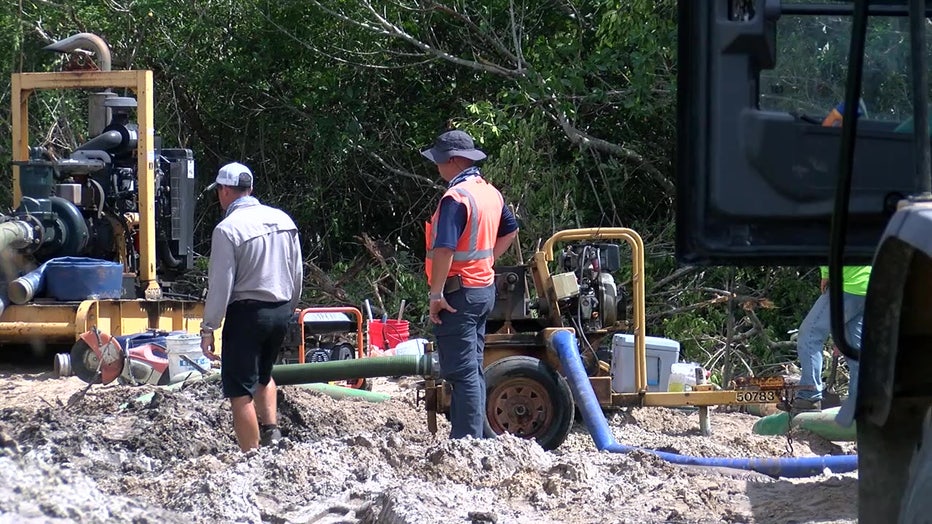 Sarasota Bay is home to thousands of animals and plants that keep our ecosystem thriving. Bloom and his volunteers continue to keep a watch out, hoping for the best.

"There will be long term impacts and ecological consequence from a spill of this volume, it will impact wildlife, birds, marine critters. These are bad pollutants," said Bloom.

This is the full statement from the Town of Longboat Key:

​
On June 29, 2020, Town staff discovered a break in the wastewater pipeline that crosses Sarasota Bay and terminates at the Manatee County Wastewater Treatment Facility.  The break occurred within a section of pipe located on undeveloped land leading to the wastewater treatment facility, (not within the portion of the pipe located beneath Sarasota Bay).   Initially, Town and Manatee County Utilities staff believed there may have been meter and equipment issues causing anomalous flow readings.  Not until June 29 did they determine there was an actual leak in the pipeline.

The Florida Department of Environmental Protection (FDEP) State Watch Office was notified by the Town’s Public Works Director on June 29, 2020, at 1:17 p.m., immediately following discovery of the leak. Town staff and Manatee County staff remained on-scene during the incident as repair contractors reported to the scene to isolate the damaged portion of the pipeline, evaluate the condition of the pipe, and conduct emergency repairs. The leak was repaired as of 5:29 p.m. on June 30.

Independent environmental consultants have been engaged to determine the extent of and impacts associated with the leak, and to identify further actions necessary to mitigate the incident. The Town reported a preliminary discharge roughly estimated at 25.8 million gallons to FDEP on June 30, 2020 at 10:38 a.m. The amount of the discharge is still being quantified.

To minimize the amount of wastewater flows through the system while the leak was being repaired, the Town issued an Alert Longboat Key emergency notification on June 29 at 8:01 p.m. to commercial entities, vendors and individuals on the island to conserve water usage and reduce wastewater production.

The Town commissioned a third-party comprehensive assessment of the pipeline in 2016 that indicated the “pipeline has a remaining useful life of 20-25 years.”  Staff outlined preliminary design and permitting for a redundant pipeline at the Town Commission’s June 1, 2020, regular meeting.