A Florida photographer captured video of a brave manatee swimming behind an alligator as it glided through that water at Myakka River State Park.

SARASOTA, Fla. - A Florida photographer recently captured a unique moment between a manatee and an alligator as the pair peacefully swam together through the Myakka River.

Video shot by Dennis Osha shows a manatee with no fear swimming closely behind an alligator as it glides through the waterway.

Osha said he often goes to Myakka River State Park to take photos of alligators. He recently went to the main bridge that goes over the river because that’s where the gators tend to congregate and that's where he spotted the pair swimming together.

"I just took out my camera, my phone actually, and decided to get video of a gator that was walking, or swimming, right by the bridge and it just happened that a manatee popped up right behind it," Osha explained.

Though Osha’s main focus is usually alligators, he’s been on a mission to spot a manatee.

"I was really excited about it because I was finally getting my picture of my manatee, not realizing at the time, that it was coming right behind the alligator," said Osha.

"Everyone was really fascinated because people didn’t realize there were manatees there," Osha added. "Everybody saw the gators and they started to realize that manatees were there, everybody started to congregate around the top of the bridge and check it out as well." 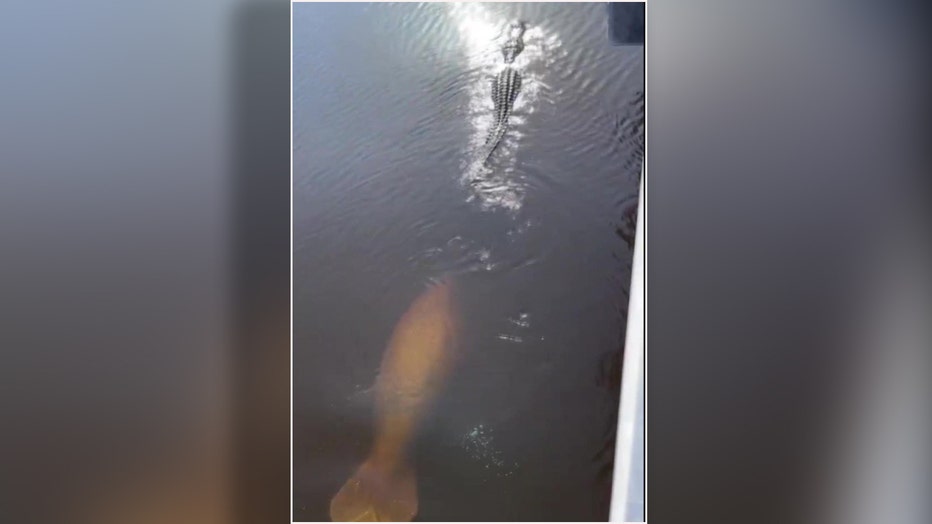 "I think it’s pretty common," he said. "They share the same waterways. Manatees are a little big for the gators to have to try to eat and everything. I think that’s pretty much what they do- peacefully co-exist."

Osha says immediately after shooting the video he texted his wife and friends.

"I knew it was a great capture when I got that on video," Osha stated.

According to NOAA, alligators tend not to eat manatees and the sea cows don’t really have any known predators. However, NOAA says humans pose a threat to manatees and they are considered an endangered and threatened species.