The Piney Point site dates back to the 1960s, when developers envisioned a phosphate mine and an oil refinery. The refinery was never built, but there has been no shortage of controversy and problems since then, Lloyd Sowers reports.

PALMETTO, Fla. - As crews rush to stabilize the Piney Point wastewater leak in Manatee County, many residents who are new to Florida may be hearing about this environmental dilemma for the first time. But it’s not a new issue and the current crisis is years in the making.

Here’s a look back at how we got to this point, and what could be next for the wastewater reservoir and others like it.

WHAT IS PINEY POINT?

Piney Point is an abandoned phosphate plant located north of Palmetto, in Manatee County, near the coastline of lower Tampa Bay.  The plant was built in 1966 and produced fertilizer for decades until it was officially abandoned by Mulberry Corporation in 2001.  The plant is located in an environmentally sensitive area, near Bishop Harbor and the Terra Ceia Aquatic Preserve. 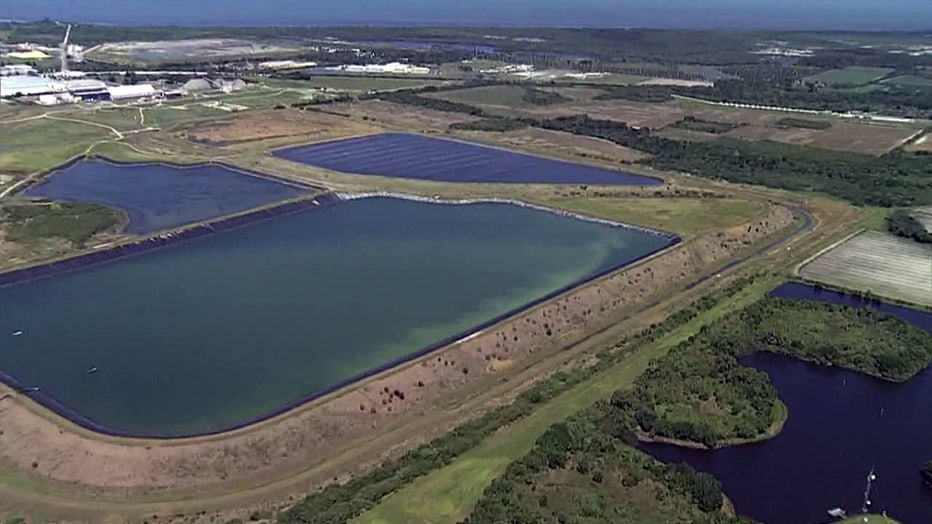 WHAT REMAINS AT THE PINEY POINT SITE?

Gypsum stacks and ponds full of wastewater.  Both are byproducts of fertilizer production and both are environmental hazards.  Phosphogypsum is a slightly radioactive biproduct with no commercial value. It is an industry practice to store it in stacks and there are two stacks at the Piney Point site.

Also on the site are ponds full of water contaminated with nutrients and heavy metals, like cadmium, held back by aging dams.  The water, used in the process of producing fertilizer, is corrosive and acidic.  The ponds have reached capacity numerous times over the years, requiring emergency releases into Tampa Bay.  The water is toxic to the marine environment and has been linked to harmful algae blooms.

On March 27, crews detected a leak in one of the containment walls holding back 480 million gallons of contaminated water.  That wall is now in danger in collapsing.  Such a failure would likely flood nearby homes as the toxic water washes toward Tampa Bay.  The impacts on marine life would be devastating.

Experts fear the water could feed algae blooms that will choke out fish and could even be harmful to humans. Craig Patrick explains what we've seen elsewhere in Florida.

WHO IS RESPONSIBLE FOR THE PINEY POINT SITE?

Mulberry Corporation filed for bankruptcy and officially abandoned the plant in 2001. The Department of Environmental Protection took responsibility for the plant until 2006, when HRK Holdings acquired the property and became responsible for managing operations at the site.  HRK had intended to turn the property into a shipping terminal.

Steve Nichols explained the plan to dump Piney Point's phosphate-contaminated water as it was envisioned in 2003.

In 2001, heavy rains from Tropical Storm Gabrielle threated to overflow the ponds and cause a catastrophic release of wastewater.  DEP, which was responsible for maintaining water levels at the time, released 10 million gallons of lime-treated water into Bishop Harbor, a marine estuary leading into Tampa Bay.

In 2003, DEP received permission from the Environmental Protection Agency to dump partially treated wastewater 100 miles offshore in the Gulf of Mexico, after a storm dumped 16.5 inches of rain on Piney Point, once again threatening to overflow the ponds.

From 2003: How much Piney Point wastewater was dumped?

With the risk of storm damage and flooding over, the EPA steps in and stops the at-sea dumping of phosphate-contaminated wastewater into the Gulf of Mexico. But all of that water still has to go somewhere, Roxanne Evanina reports.

In 2011, a liner on one of the gypsum stacks was punctured, causing water to leak through the stack, picking up pollutants along the way.  The DEP ordered the pond to be drained and the liner repaired.  170 million gallons of contaminated water were dumped into Bishop Harbor and lower Tampa Bay.

Hundreds of residents around Piney Point have been asked to evacuate as 2-3 million gallons of water per day flow from a leak in a containment wall. Officials say the stack collapsed further despite overnight efforts from state and local crews.

Residents and business owners in Piney Point say they’ve dealt with this problem for long enough. They now want a more permanent solution.