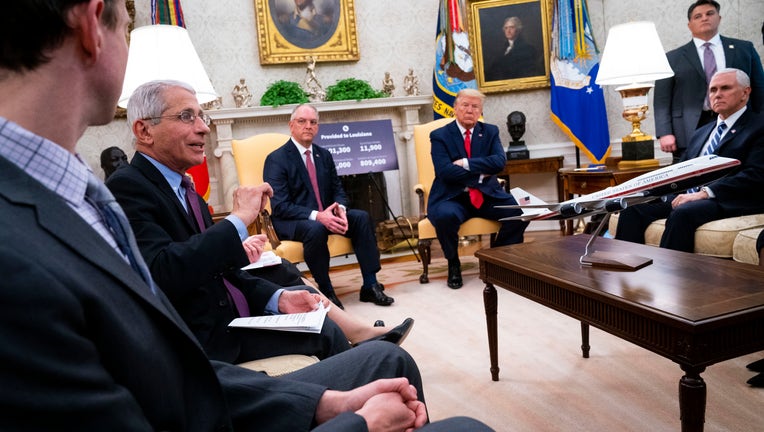 WASHINGTON (AP) - The White House has begun discussions about winding down its coronavirus task force, which has already been meeting less frequently, Vice President Mike Pence said. Its members have become fixtures on television sets across the nation, with Americans hungry for information and marooned at home.

“I think we’re having conversations about that and about what the proper time is for the task force to complete its work and for the ongoing efforts to take place on an agency by agency level," Pence said at the White House.

He said the group could wind down its work by early June.

Pence told reporters at a White House briefing that the U.S. could be “in a very different place” by late May and early June. Pence said the administration is beginning to eye the Memorial Day to early June window as the appropriate time to have federal agencies manage the pandemic response in a more traditional way.

Pence’s comments came as an Associated Press analysis found infection rates rising even as states started to lift their lockdowns.

The vice president characterized the discussions as preliminary.

Speaking from a mask factory in Arizona on Tuesday, Trump said “We’re now looking at a little bit of a different form, and that form is safety and opening,” "and we'll have a different group, probably, set up for that.”

Asked about his statements in February playing down the threat of the virus, Trump told ABC in an interview that medical experts also had underestimated the risk and added: “I want to be optimistic. I don’t want to be Mr. Doom and Gloom. It’s a very bad subject. I’m not looking to tell the American people when nobody really knows what is happening yet, ‘Oh this is going to be so tragic.’”

Trump is seeking to pivot his focus away from the virus's spread and toward more familiar — and, aides hope, politically safer — ground: talking up the economy. As more states have begun to ease closure orders, despite warnings that that could lead to spikes in new cases, Trump has been trying to highlight his administration’s work in helping businesses and employees rebound.

To that point, aides said the president would hold more frequent roundtables with CEOs, business owners and beneficiaries of the trillions of dollars in federal aid already approved by Congress, and begin to outline what he hopes to see in a future “phase four” recovery package.

"It took us a while to build that capacity and we’ll make sure that we’re watching that at a federal level," she said.

Trump and his White House team have been operating in a virus-safe bubble, thanks to the rapid coronavirus tests provided to senior staff and anyone who meets with the president.

Trump has been repeatedly talking up the administration's response to the virus, despite persistent criticism that he dragged his feet and failed to adequately increase production of personal protective equipment and testing supplies.

“We did everything right. Now it’s time to get back to work," he said. He added that the country has "the best testing,” with more than 7 million now completed, even as some experts say millions more people must be tested every week for the country to safely reopen.