The United States will be represented by 217 athletes in 15 sports at the Beijing Olympics. Here's a look at the Americans to watch at the Winter Games:

LOS ANGELES - The forecast for the upcoming Winter Olympics in Beijing: Cold with a 100 percent chance of fake snow.

This year’s highly anticipated Winter games are actually going to be the first time in Olympic history where athletes will compete on 100% artificial snow.

More than 100 snow generators and 300 snow-making guns will work to cover ski slopes. Many athletes are concerned about the new reality.

Many top Nordic skiers and biathletes say crashes on artificial snow are becoming more common as climate change reduces the availability of natural snow, forcing racers to compete on tracks with the manmade version. Olympic and World Cup race organizers have come to rely on snow-making equipment to create a ribbon of white through the hills since natural snowfall is less reliable.

"Artificial snow is icier, therefore faster and more dangerous," she said. "It also hurts more if you fall outside of the course when there is no fluffy snowbank, but a rocky and muddy hard ground."

What are the dangers of fake snow?

Manmade snow has a higher moisture content, making it ice up quickly, skiers and experts say.

"It can be really rock hard out there and falling can feel like falling on concrete, and so it does make it a little bit more dangerous than if it was natural snow conditions," said Chris Grover, head cross country coach for the U.S. Ski Team.

Some venues even make snow and then store it under wood chips through the summer and spread it around a track when it gets cold. Artificial snow, welcome as it may be, does not get better with age. Race organizers should take that into consideration when designing courses, skiers and experts say. 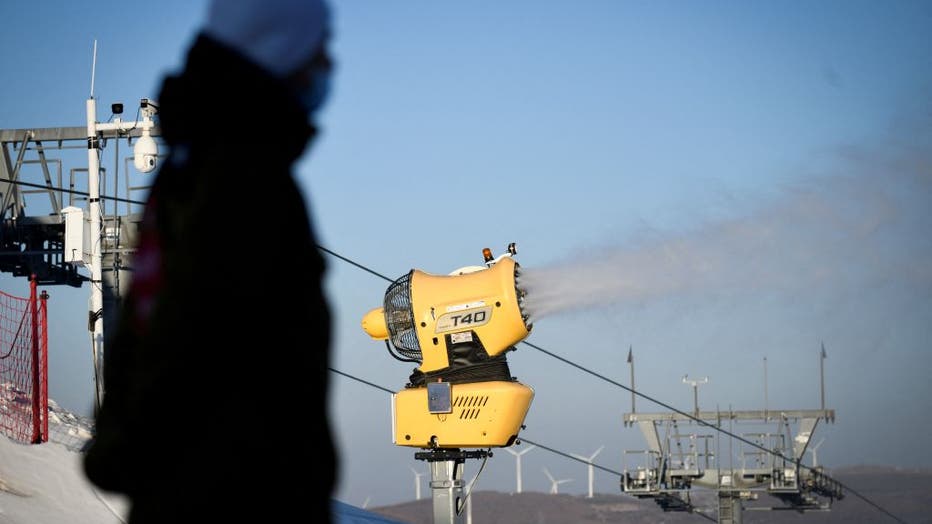 A snowmaking machine is seen at the Genting Snow park, a venue for the Beijing 2022 Olympic Winter Games, during a media tour of the 2022 Winter Olympic Games venues in Chongli county, Zhangjiakou city, China's Hebei province on December 21, 2021. (P

"It’s pretty universally recognized that courses are firmer and faster than before," said Gus Schumacher, a member of the U.S. cross country team. While racing in France, "there were a couple crashes where people slipped out on the icy corners because that snow is super unforgiving. Like, it’s really sharp crystals that don’t bind together that well."

John Aalberg, a former Olympic cross country skier who designs Olympic Nordic ski courses, including for the Beijing Games, said they always consider icy conditions when designing a course. He said a bigger safety issue was the change in race formats from individual starts to mass start races.

"When you ski one-by-one like they used to do in the ’90s, you could have gnarlier downhills and corners because they came one at a time," he said. "What’s important in terms of safety is that downhill corners aren’t too tight in terms of width."

Unlike Alpine equipment, cross county skis don’t have metal edges. They’re designed to be thin and lightweight for climbing hills and gliding over flats. The boots are flexible and connect to the ski with a single metal bar under the toe. Nordic skiers don’t use the edge of the ski to navigate around a corner. Instead, they take fast baby steps to get around the curve.
All of that is more difficult on manmade snow.

Why is fake snow being used at the Beijing games?

Intertrust Technologies analyzed weather in Beijing and found there wasn’t a single winter that produced "sufficient snow" — more than 13 feet — to set down the Alpine and snowboarding runs that will be used at the Olympics. On the other hand, the overall mean temperature of 12 degrees (minus-11 Celsius) in January and 20 degrees (minus-6 Celsius) in February makes it likely there will be ideal snowmaking conditions for the games.

This has been an ongoing theme for the Olympics, and winter sports in general, as the effects of climate change directly impact the games and the athletes who play them.

Of the potential 2026 candidates, Calgary and Sapporo, Japan had the most consistent strings of temperatures of 26 degrees (minus-3 Celsius) or less, which is considered ideal to maintain man-made snow. Calgary was also the leader as the city with the most real snow and best conditions to maintain it.

Only 13 of the last 39 Januarys in Utah, which appears to be a contender for the 2030 Games, have had optimal conditions for natural snow.

What is artificial snow?

Artificial snow "isn’t really snow at all," said Jim Steenburgh, professor of atmospheric sciences at the University of Utah. "What it is is water that’s blown through nozzles that break up the water into extremely small and tiny droplets that then freeze. While the structure of natural snow is fundamentally different."

Fake snow has a higher water content so it has a high density and tends to be really durable, making it good for ski racing, at least for Alpine ski racing, he said.