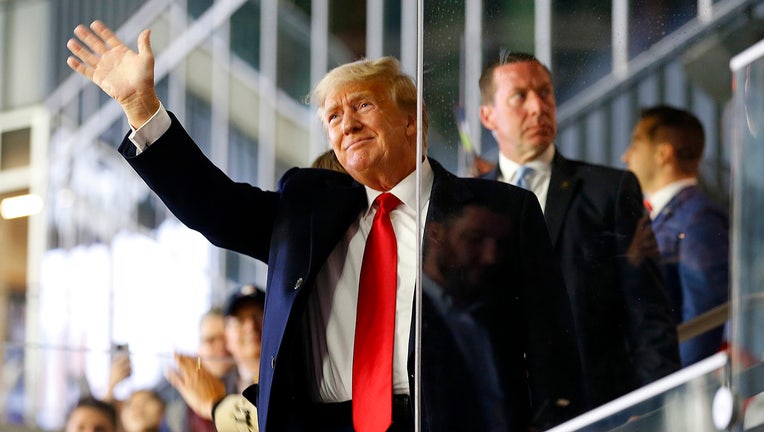 Former president Donald Trump waves prior to Game Four of the World Series between the Houston Astros and the Atlanta Braves. (Photo by Michael Zarrilli/Getty Images)

TAMPA, Fla. - Just hours after hinting that he will indeed run for president again in 2024, Donald Trump will be in Tampa, attending a fundraiser for congressional Republicans.

The former president is speaking at the National Republican Congressional Committee’s annual dinner Monday night in Tampa. The NRCC is the fundraising arm of Republicans in the House of Representatives.

"Look forward to being there!" Trump said in a brief press release announcing his appearance.

Meanwhile, Trump told FOX News he will "probably" wait until after the 2022 midterm elections to formally announce whether he will run for president in 2024.

"I am certainly thinking about it and we’ll see," Trump said. "I think a lot of people will be very happy, frankly, with the decision, and probably will announce that after the midterms."

When asked whether he would consider Gov. Ron DeSantis as a running mate, Trump said, "He’s a good man, but we have a lot of great people. He’s been good."

RELATED: Gov. DeSantis officially files to run for reelection in 2022

DeSantis officially filed the paperwork Friday to run for re-election as governor. Despite regularly being mentioned as a possible presidential candidate and his frequent appearances on FOX News, DeSantis so far has insisted he wants to focus on issues in the Sunshine State

"I'm not considering anything beyond doing my job," he told Fox News' Sean Hannity. "That is way down the road; it is not anything that I'm planning for."