TAMPA, Fla. - A woman accused of driving while intoxicated, crashing into a Tampa dealership lot, and killing one of her passengers will remain behind bars at the Falkenburg Road Jail after a judge decided to have her held without bond.

Jennifer Carvajal had a detention hearing Monday afternoon, where prosecutors argued that letting her out while her case is pending would be a mistake. For the 24-year-old, this isn’t the first time she’s been arrested for driving drunk and causing an accident that resulted in a death.

Two weeks ago, Carvajal got behind the wheel intoxicated with her cousin and two other passengers. They were on their way home from her grandfather‘s birthday party when a trooper clocked her going 111 mph. In an attempt to evade the trooper behind her, Carvajal drove off the road and crashed into a nearby car dealership, officials said. 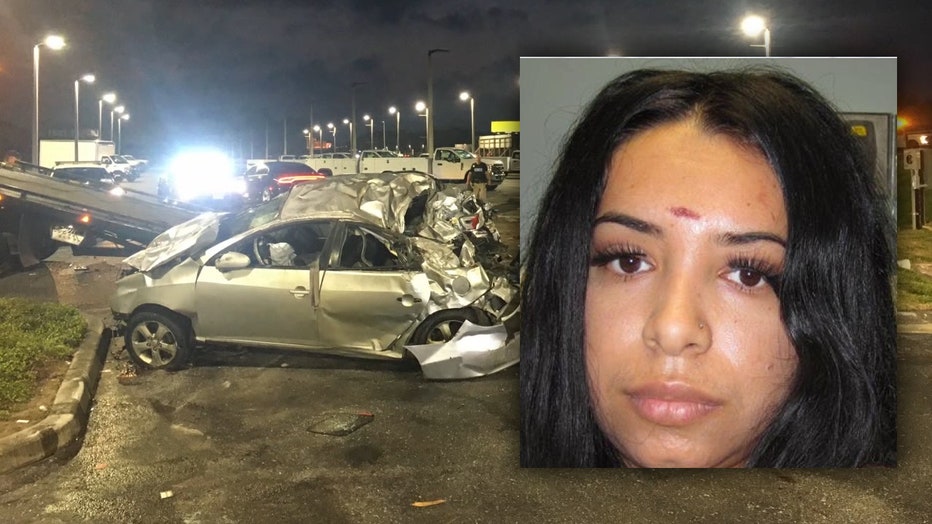 Carvajal was the only person in the car wearing her seatbelt. Two passengers were flung from the vehicle, and her 22-year-old cousin died as a result of the crash, troopers said.

At the time of the crash, she was on probation for a similar drunk driving crash that killed a 52-year-old man back in 2014 in Hillsborough County.

The prosecution said Carvajal should not be released from jail while her case is pending, saying she’s a danger to society and that because this is the second death she’s caused as a result of impaired driving.

In the detention hearing, Judge Catherine Catlin granted the state's motion for pre-trial detention and held Carvajal without bond on the DUI manslaughter charge.

Though witnesses were present -- including troopers Joshua Lugo and Jason Moore -- they did not speak. We also saw Pedro Carvajal’s mother, Jazmin Dominguez, who prosecutor Stephanie Pizarro says Carvajal has tried reaching after the crash.

"The defendant both directly and indirectly has made attempts to reach out to the victims in this case and the family of the victim in this case."

The judge approved Pizarro’s motion to prevent Carvajal from doing so in the future.

Carvajal was initially facing DUI charges following the April crash, but court records show those charges were upgraded on May 5. She is facing DUI manslaughter and vehicular homicide, in addition to violating probation for her prior DUI manslaughter conviction.