Bill Schwalbe was excited to see his dream home become a reality, but with about 70% of the work done and no workers in sight, he's forced to figure out how to proceed.

But more than a year past the promised finish date, what he's left with has been more of a nightmare.

He took FOX 13 News on a tour of the property and explained how he hired SUNdog Structures to build him a container home in Tampa Heights back in 2017. But as deadlines came and went, he says his frustrations mounted.

“My very first Gantt chart/project timeline was for March 28, 2018," Schwalbe said. "My original expectation was January or February 2018. So when I got that, I was bummed, but I said to be patient and thought, 'I'd get into the house when I get into the house.'"

From there, the project began stretching on and on, with what Schwalbe calls delays and excuses. He says SUNdog told him city permits were taking extra time, and then the foundation needed to be re-worked. Over the next year, it became a yo-yo of progress and pauses. 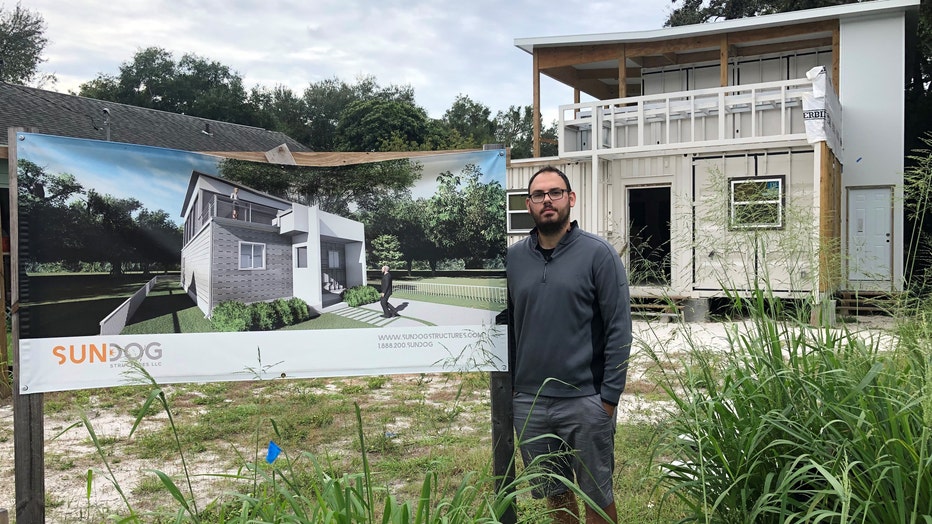 Bill Schwalbe stands with his unfinished home next to the photo of what it's supposed to look like.

“I had to just keep telling myself: 'You’re building a dream house. You can’t do anything about it,'" he said. "But then, I started seeing progress. I started seeing things being put together, then they dropped the containers off in March. Things are moving, I’m excited. Then things start slowing down over summer, until Labor Day, and there’s a complete stop.”

Now his home is about 70% complete. He says it's still thousands of dollars away from finished. But Schwalbe's isn't the only structure of SUNdog's to come to a halt. The owner of another container home under construction on North A Blvd. tells FOX 13 workers haven't made progress in months.

The property owners eventually put a work-stop order on the house.

Hillsborough County court documents show multiple lawsuits have been filed in the last few months against SUNdog. In one, investor John Glasscock is suing for $1.1 million for breach of contract. According to the lawsuit, SUNdog failed to make payments in June, July, and August, defaulting on the loan. In another, a metal services company named McNICHOLS Company claims SUNdog failed to make a payment for more than $6,000 in materials.

In a statement to FOX13, SUNdog's CEO Robert Cox says:

"SUNdog has completed multiple builds throughout the State of Florida and beyond for a variety of clients. We experienced delays in permitting on several projects in Tampa requiring additional capitalization. We have been working with funding resources to provide interim and long-term funding, however the duration of these efforts has impacted the completion of a couple of our projects. We are continuing construction efforts on these projects and are committed to completing them as quickly as possible."

"All I wanted was my dream house built," he said. "So at the end of the day, I signed a contract. That’s what I want completed. Obviously, they’re not going to do it, so I need to figure out how I’m going to do it myself.”