TOKYO (AP) - Two South African soccer players became the first athletes inside the Olympic Village to test positive for COVID-19, and other cases connected to the Tokyo Games were also confirmed Sunday, highlighting the herculean task organizers face to keep the virus contained while the world's biggest sports event plays out.

The positive tests came as some of the 11,000 athletes and thousands more team officials expected from across the globe began arriving, having traveled through a pandemic to get to Tokyo.

They'll all now live in close quarters in the Olympic Village on Tokyo Bay over the next three weeks.

International Olympic Committee President Thomas Bach said last week there was "zero" risk of athletes passing on the virus to Japanese or other residents of the village. But that bold statement was already being tested.

The Olympics, which were postponed for a year because of the pandemic, are set to officially open on Friday and run until Aug. 8.

The two soccer players and a team video analyst who also tested positive had been moved to "the Tokyo 2020 isolation facility," the South African Olympic committee said. The rest of the squad members and officials had also been quarantined.

Those positive tests further stoked local fears, with the South African team scheduled to play against host nation Japan in its first game on Thursday.

There has already been consistent opposition from the Japanese public to holding the Olympics during the pandemic, with fears that it could become a super-spreader event and cause a spike in infections among Japanese people. 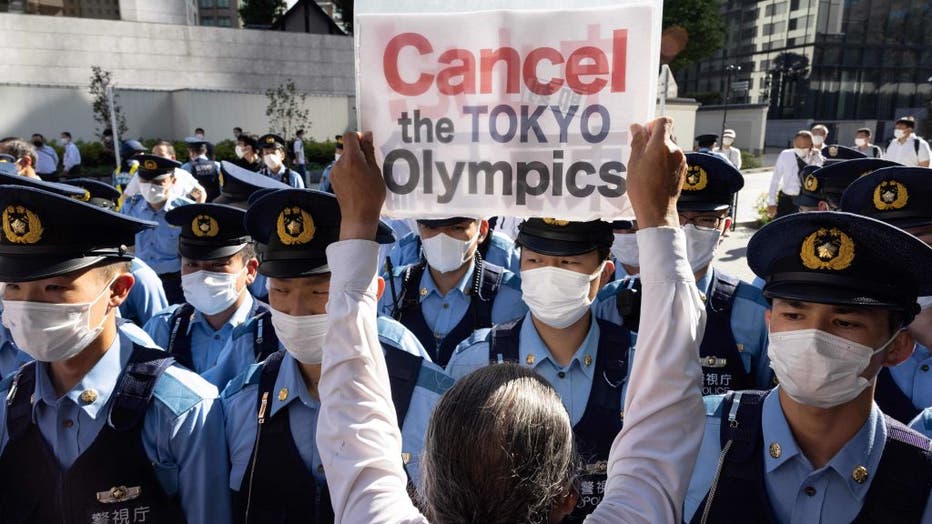 Police officers block a small group of activists as they walk towards the hotel where International Olympic Committee president Thomas Bach is staying for a demonstration in Tokyo on July 17, 2021, calling for the cancellation of the Tokyo 2020 Olymp

Bach and the IOC have insisted it will be safe and have forged ahead against most medical advice. The IOC says it sees the Games as a chance to foster international solidarity during difficult times, but the IOC would also lose billions of dollars in broadcast rights if the Games were to be canceled completely.

Also Sunday, Team South Africa confirmed the coach of its rugby sevens team also tested positive at a pre-Olympics training camp in the southern Japanese city of Kagoshima. He was also in isolation there and would miss the entire rugby competition, the team said.

And there were other Olympics-related positive tests. Olympic organizers said that another athlete had tested positive, although they were not residing in the Olympic Village. The athlete was not named and only identified as "non-Japanese."

The first International Olympic Committee official was reported as positive. He recorded a positive test on Saturday when arriving at a Tokyo airport. The IOC confirmed the test and identified him as IOC member Ryu Seung-min of South Korea. He was reportedly being held in isolation, too.

Former distance runner and world championship bronze medalist Tegla Loroupe, the chief of mission of the IOC’s Refugee Olympic Team, tested positive for COVID-19 before the team was to depart its Doha, Qatar, training base for Tokyo, two people with knowledge of her condition told the AP. The team delayed its arrival in Tokyo while Loroupe is expected to stay behind, according to the two people, who requested anonymity because they weren’t authorized to reveal medical information.

Organizers say that 55 people linked to the Olympics in Japan have reported positive tests since July 1, but that figure does not include athletes or others who may have arrived for training camps but are not yet under the "jurisdiction" of the organizing committee.

Tokyo reported 1,008 new COVID-19 cases on Sunday, the 29th straight day that cases were higher than seven days previously. It was also the fifth straight day with more than 1,000 cases. The Olympics will open under a state of emergency in Tokyo and three neighboring prefectures.

No fans, Japanese or foreign, will be allowed at any of the Olympic sports in Tokyo and the three neighboring prefectures. A few outlying venues may allow a small number of local fans, but it has effectively become a TV-only event.

About 200 protesters gathered Sunday outside Shinjuku station in central Tokyo, waving signs that read "No Olympics." It was the latest in a series of small protests against the Games in the last few months.

"This is ignoring human rights and our right to life," protester Karoi Todo told the AP. "Infections are increasing. To do the Olympics is unforgivable."

Japanese and IOC organizers hope stringent testing protocols, where athletes, team officials and others are tested daily, will mitigate the risks posed by the thousands of foreigners arriving at once. Visiting athletes, officials and media will be in a "soft quarantine" situation and restricted to the Olympic venues, the village and designated hotels, and will be kept away from the Japanese general public. The IOC also says more than 80% of the athletes set to compete in Tokyo will be vaccinated against COVID-19.

But, despite the assurances, the positive tests five days out from the opening ceremony showed the regulations aren't — and can't be — foolproof.

The South African team's chief medical officer said every member of the team had two negative tests before traveling to Japan "as per Tokyo 2020 requirements." They also tested negative on arrival in Tokyo, Dr. Phatho Zondi said.

Coach Neil Powell and the entire South Africa rugby squad were held at a quarantine facility after arriving in Japan because of a positive COVID test on their flight, Team South Africa said. They were cleared to leave, only for Powell to test positive a few days later.

Powell had been vaccinated against COVID-19 with the one-shot Johnson & Johnson vaccine in South Africa on May 24, team spokesman JJ Harmse told the AP.

South African Olympic and soccer officials didn’t immediately confirm whether the two soccer players and official who tested positive had been vaccinated, although South Africa’s Olympic committee said in May it would offer all its Olympic athletes the J&J vaccine.

The Olympics were effectively over before they began for the two soccer players and Powell as they would have to remain in quarantine for 14 days under Japanese regulations.

The only way the soccer players might be able to play is if their team made the semifinals. Powell would definitely miss the entire rugby competition and his Olympic experience will involve being kept in isolation in a room for two weeks before flying back home.