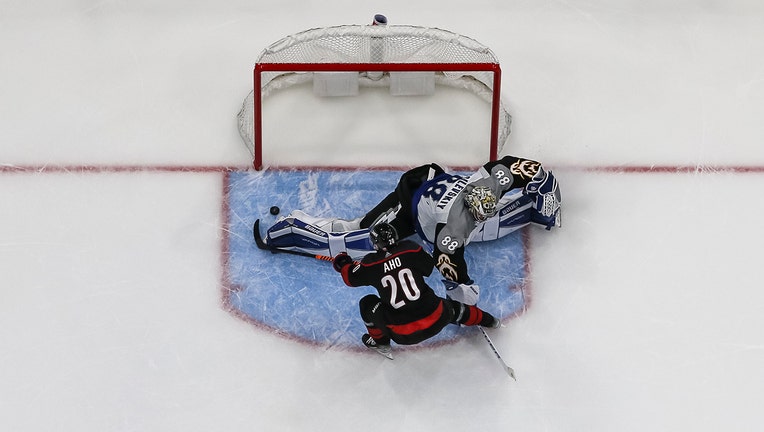 Goalie Andrei Vasilevskiy #88 of the Tampa Bay Lightning gives up a goal against Sebastian Aho #20 of the Carolina Hurricanes during the shootout at Amalie Arena on November 3, 2022 in Tampa, Florida. (Photo by Mark LoMoglio/NHLI via Getty Images)

TAMPA, Fla. - Sebastian Aho scored in the sixth round of the shootout, and the Carolina Hurricanes beat Andrei Vasilevskiy and the Tampa Bay Lightning 4-3 on Thursday night.

The Hurricanes won the shootout 2-1.

Vasilevskiy made 53 saves in regulation and overtime. He made several strong stops during an OT power play for Carolina, including shots by Aho and Brent Burns.

Brady Skjei tied it at 3 when he scored a short-handed goal for the Hurricanes at 13:34 of the third.

It is Kucherov's sixth career streak of having a goal in five or more games. The only active players with more are Alex Ovechkin (12), Tampa Bay teammate Steven Stamkos (11), Sidney Crosby (nine) and Auston Matthews (eight).

Jalen Chatfield was called for tripping and then picked up a high-sticking call after the whistle that led to Colton’s tying goal at 5:50 during a four-minute power play.

Tampa Bay got a 5-on-3 power play late in the second when Chatfield received a cross-checking penalty and Jordan Martinook was sent off for slashing Colton after the play was over.

Kucherov then gave Tampa Bay a 3-2 lead from the top of the right circle with one minute to go in the period.

Jarvis opened the scoring from the left circle five seconds after a Carolina power play ended 8:29 into the game. He is the sixth player in Carolina team history to reach 20 goals before turning 21.

NOTES: Kucherov also has a nine-point streak. He has a point streak of at least nine games in five of the last six seasons. ... Burns, who had an assist, and Necas both have five-game point streaks.

Lightning: Play the third of a four-game homestand Saturday night against Buffalo.