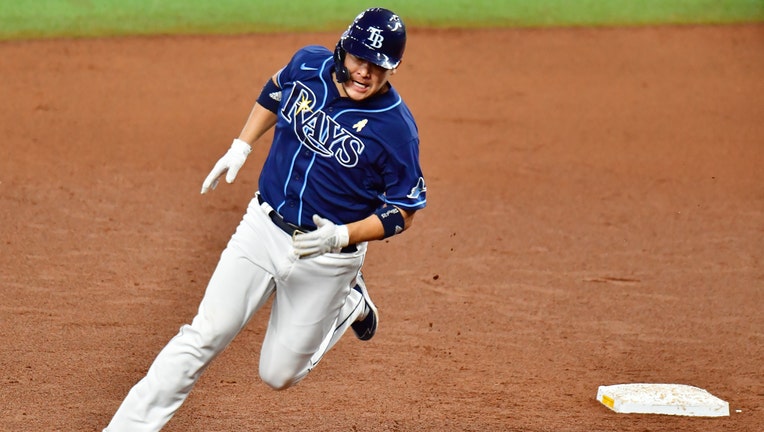 ST PETERSBURG, FLORIDA - SEPTEMBER 05: Yoshitomo Tsutsugo #25 of the Tampa Bay Rays runs the bases after teammate Michael Perez #7 hit an RBI double in the fifth inning against the Miami Marlins at Tropicana Field on September 05, 2020 in St Petersbu

The Marlins improved to 15-8 away from home and are looking to finish the season with a winning road record for the first time since 2009 (44-37). Miami had lost nine in a row to the Rays.

“It was good,” Miami manager Don Mattingly said. “We needed that. I thought Sandy was really good tonight. Gutted it out.”

Blake Snell (3-1) allowed five runs and six hits over five innings for the Rays, who are 21-5 over their last 26 games.

“I really do feel good,” Snell said. “I’ve got to be better, that’s the bottom line.”

Miami left fielder Harold Ramirez, who was reinstated from the COVID-19 injured list, before the game, strained his left hamstring running out a fifth-inning grounder. Halfway down the line he got hurt and slammed his helmet to the ground. After struggling to reach first base, he went down to the ground and stayed there until being taken away in a cart.

“It looked pretty bad,” Mattingly said. “He was definitely in some pain. Just saw him in the trainer’s room and he said he feels better. We’ll see what happens tomorrow, but it obviously didn’t look very good out there.”

Ramirez will have an MRI on Sunday.

“Alcantara was so good,” Rays manager Kevin Cash said. “They have some talented starting pitchers.”

The right-hander allowed a career-high eight runs over four innings in losing to Snell last Sunday.

“They got me a couple of days ago and I got them now,” Alcantara said.

Dickerson hit a two-run shot in a four-run fourth against Snell. After Jesús Aguilar scored on a passed ball when Lewis Brinson struck out, Ramirez had a run-scoring single. Dickerson followed with just his third hit — all homers — in 27 at-bats.

Michael Perez had an RBI double in the fifth and got the Rays within 7-3 with a two-run single in the ninth off Brandon Leibrandt.

Brandon Kintzler got the final out for his ninth save.

Matt Joyce drove in two on a single during the seventh to make it 7-1.

Marlins: RHP Elieser Hernandez (right lat) has his season end after being placed on to the 60-day IL. ... INF Garrett Cooper (quadriceps) was out of the starting lineup.