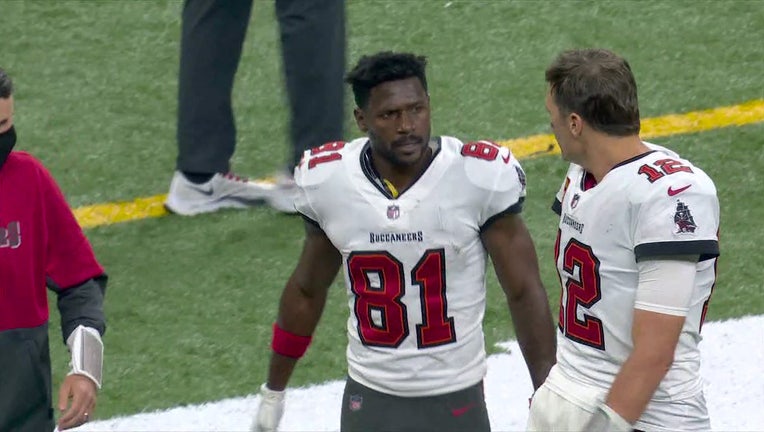 TAMPA, Fla. - Antonio Brown knows if it wasn't for Tom Brady, his NFL career might be over.

"He’s helped me get to the point where I am right now," said Brown. "He’s helped me grow as a person -- physically, mentally, emotionally -- and he kind of put some things in perspective…making sure I got a plan, and I’m not letting any outside noise diffuse that plan."

Since signing with the Buccaneers in October, Brown has been on his best behavior.  It's earned him a second chance in the league and a second shot at a Super Bowl title.

"It’s all about controlling your emotions -- physically, mentally -- when you don’t feel good," continued Brown. "Not being a slingshot when others come at me, learning how to control my attitude, not letting my emotions get the best of me, even if I feel someone was wrong for doing what they did, just being forgiving, just staying positive."

A knee injury knocked Brown out of the last two playoff games. He's expected to be ready for Super Bowl Sunday.

Tom Brady has lined up next to 218 teammates on the biggest stage in sports, including at least three players who have made the Pro Football Hall of Fame

What he's learned under Brady this season is to take advantage to what is given.

"I was excited and grateful for any opportunity I could have, if there was two plays, or 20 plays," he said. "For me, it’s just staying ready. I don’t know how many plays I’m going to get. I don’t know when the moment is going to be the moment, I just prepare my mind to be positive and poised and be ready for all the outcomes."

"I just think it was my only chance to be able to prove to not only the doubters, but to prove to myself I’m still a high-end football player; still love the game, still love to compete," said Brown.  "I had to prove it to myself I never gave up, or gave in. I stayed consistent and persistent to my goals and vision. And I’m here right now, and I’m grateful."