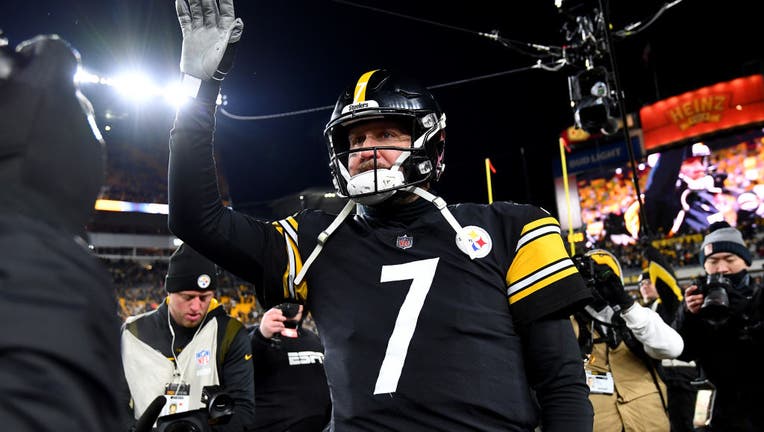 Ben Roethlisberger, No. 7 of the Pittsburgh Steelers, waves to the crowd after his final game at Heinz Field where he defeated the Cleveland Browns 26-14 on January 03, 2022 in Pittsburgh, Pennsylvania. (Photo by Joe Sargent/Getty Images)

PITTSBURGH, Penn. - Ben Roethlisberger announced his retirement from the NFL on Thursday with a video posted to his Twitter page.

Roethlisberger played quarterback for the Pittsburgh Steelers for 18 seasons. He appeared in three Super Bowls and hoisted two Lombardi trophies.

In nearly two decades in the black and gold, Big Ben never finished with a losing season. His regular-season record finished at 165-81-1. In the playoffs, he finished 13-10.

They won eight AFC North titles, made the playoffs 12 times and advanced to the AFC Championship game five times.

"I don’t know how to put into words how much the game of football has meant to me and what a blessing it has been," Roethlisberger said in his retirement video. "While I know with confidence I have given my all to the game, I am overwhelmed with gratitude for all that it’s given me."

As the season drew to a close, the Steelers seemed to rally around Roethlisberger. They came from behind to beat the rival Cleveland Browns in what was Big Ben’s last home game on Jan. 3.

Heinz Field was full of tributes to the longtime QB, who soaked in all the praise after Pittsburgh sealed at 26-14 win.

The following week, the Steelers clinched a playoff berth with a 16-13 win at the Baltimore Ravens thanks to late-game heroics from Roethlisberger.

It’s what became expected of him over the years. Roethlisberger finished his career tied for the second most game-winning drives (53) of all time. When the playoffs are considered, including the drive that won the Steelers Super Bowl XLIII, Roethlisberger has 57.

The late-game magic ran out against the Kansas City Chiefs, who eliminated the Steelers from the playoffs with a comfortable 42-21 win.