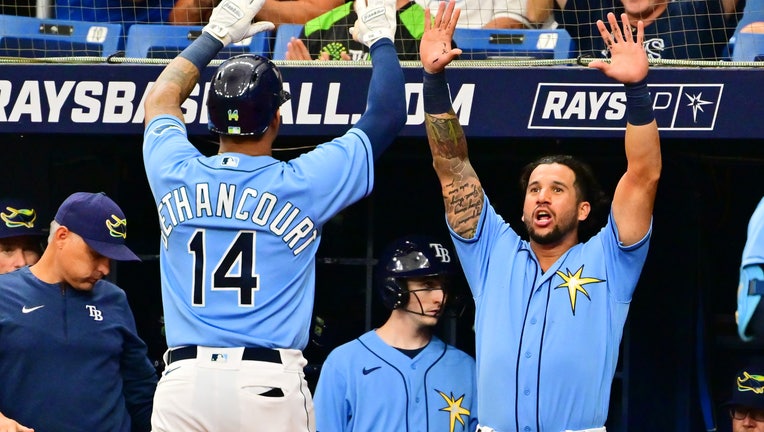 ST PETERSBURG, FLORIDA - SEPTEMBER 18: Christian Bethancourt #14 of the Tampa Bay Rays celebrates with David Peralta #6 after hitting a home run in the second inning `atex at Tropicana Field on September 18, 2022 in St Petersburg, Florida. (Photo by

ST. PETERSBURG, Fla. - Christian Bethancourt and Jose Siri hit back-to-back homers over a three-pitch stretch in the second inning, and the Tampa Bay Rays beat the Texas Rangers 5-3 on Sunday.

Bethancourt had three hits, and Siri went 2 for 3 with a walk. Jonathan Aranda, Manuel Margot and Taylor Walls each drove in a run.

"That was very fun," Siri said through a translator about the consecutive homers. "It was really cool. He hit the homer, we gave him a hug, and then when I hit the homer and I came into the dugout he came over and gave me a hug."

Tampa Bay (82-64) secured its fifth straight winning season and moved within a half-game of Toronto for the top AL wild card. The Rays hold a 5 1/2-game lead with the tiebreaker over Baltimore, which is fourth in the race to earn one of three wild cards.

The Rays wrap up their final regular-season homestand this week with three against AL-leading Houston starting Monday night and four beginning Thursday night against the Blue Jays.

"There's no doubt it is challenging," Tampa Bay manager Kevin Cash said. "It will be a lot of work to get through, certainly, the rest of his homestand."

Rays left-hander Jeffrey Springs (9-4) pitched 5 2/3 innings of three-run ball. He did not allow a run in his previous three starts, totaling 14 2/3 innings.

Pete Fairbanks, the fourth Rays reliever, worked the ninth for his eighth save in eight chances. It was his 19th consecutive scoreless outing.

The Rangers had six hits and struck out 13 times.

The Rays opened a 4-1 lead with two runs in the third. Aranda hit an RBI double and scored on Margot's single.

Texas responded with two runs in the sixth. Seager hit a leadoff drive for his 31st homer in his first season with the Rangers.

Springs caught Adolis García too far off first with two outs, but he advanced to third when second baseman Aranda was charged with an error for not handling a throw from first baseman Harold Ramirez.

Jung followed with an RBI single. He has hits in eight of 10 games since being promoted from Triple-A Round Rock on Sept. 9.

The Rays loaded the bases with two outs in the sixth and went up 5-3 when Walls drew a walk against Brock Burke on a 3-2 pitch.

Rays play-by-play announcer Dewayne Staats will throw a ceremonial first pitch before Monday night’s game against Houston in honor of broadcasting his 7,000th major league game. He started with the Astros in 1977.

Rangers: OF Nick Solak (small right foot fracture), hit by a pitch Wednesday, will miss the rest of the season. ... RHP Joe Barlow (right index finger blister) will make his second appearance Tuesday or Wednesday with Triple-A Round Rock. ... RHP Spencer Howard (right shoulder impingement) is set to make his third start Friday with Round Rock.

Rays: RHP Tyler Glasnow (Tommy John surgery) struck out four over two perfect innings in his third start with Triple-A Durham. ... Reliever Nick Anderson (right elbow surgery and plantar fasciitis), who has struggled in the minors this season, has opted to end his season. ... INF Wander Franco took an awkward step on an infield hit in the sixth but remained in the game. ... OF Randy Arozarena (illness) missed his second straight game.

Rangers: LHP Cole Ragans (0-2) will be looking for his first big league win in his seventh career start Tuesday night against the Los Angeles Angels.