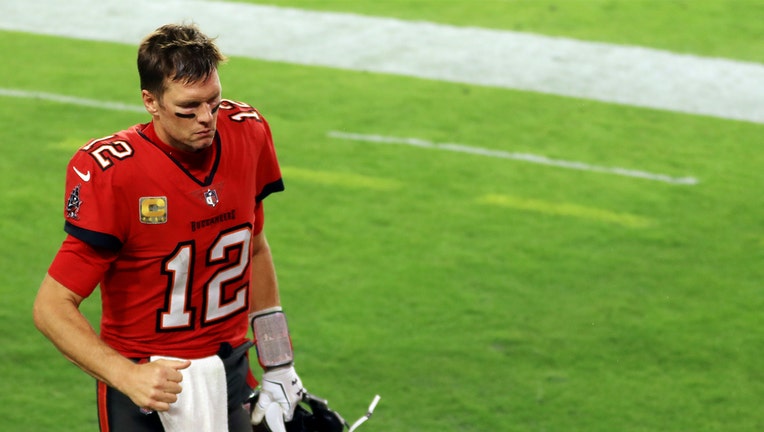 Tom Brady #12 of the Tampa Bay Buccaneers jogs off the field after being defeated by the New Orleans Saints 38-3 at Raymond James Stadium on November 08, 2020 in Tampa, Florida. (Photo by Mike Ehrmann/Getty Images)

TAMPA, Fla. - Tom Brady began the game with four consecutive three-and-outs. Things only got worse for the Tampa Bay Buccaneers after that.

“When things don’t go your way, sometimes they keep going that way,” the six-time Super Bowl champion said after throwing three interceptions and only producing a field goal in Sunday night’s ugly 38-3 loss to the New Orleans Saints.

“You’ve got to figure out a way to turn it around,” Brady added. “We had our opportunities. We just didn’t do it.”

While the Bucs (6-3) were sputtering to begin the game, the Saints were clicking on all cylinders.

Drew Brees threw two touchdown passes in the opening quarter, then an third early in the second.

By the time Brady tossed his first interception to end a franchise-record streak of 200 consecutive pass attempts without a pick, the Bucs trailed 21-0 and the turnover on a deflection set up yet another TD on the way to a 31-0 halftime deficit.

“It was shocking, to watch us practice all week, to know how confident we were coming in,” coach Bruce Arians said of the lopsided loss, which ended Tampa Bay’s three-game winning streak and dropped the Bucs a half game behind the first-place Saints (6-2) in the NFC South standings.

“We didn’t play well in any phase of the game,” Brady said. “We got to start better on offense and help our defense. That’s how I see it.”

The offense struggled despite wide receiver Chris Godwin (three receptions, 41 yards) returning to the lineup after missing one game with a broken finger and adding Antonio Brown (three catches, 31 yards) to the mix in his debut with the Bucs.

Brady wasn’t even able to take advantage of great field position the offense was given when linebacker Shaquil Barrett sacked Brees in the third quarter, forcing a fumble that safety Mike Edwards returned 31 yards to the Saints 21.

Two plays later, a pass interference penalty in the end zone moved the ball to the 1, where the scoring opportunity dissolved with one run for no gain and three incompletions.

The Bucs avoided a shutout when Ryan Succop kicked a 48-yard field goal with just under six minutes remaining.

“Everyone’s got to do a lot better, and it starts with me,” Brady said.

The defense, which entered the game ranked No. 1 against the run and third overall, didn’t play well either.

The Saints scored on five of their first six possessions, with only Jared Cook’s fumble at the Bucs 2 preventing them going six-for-six to begin the game.

“It’s pretty embarrassing. I think there was less than a handful of times we stopped them the whole game. ... It was a collapse, a total team collapse,” Barrett said.