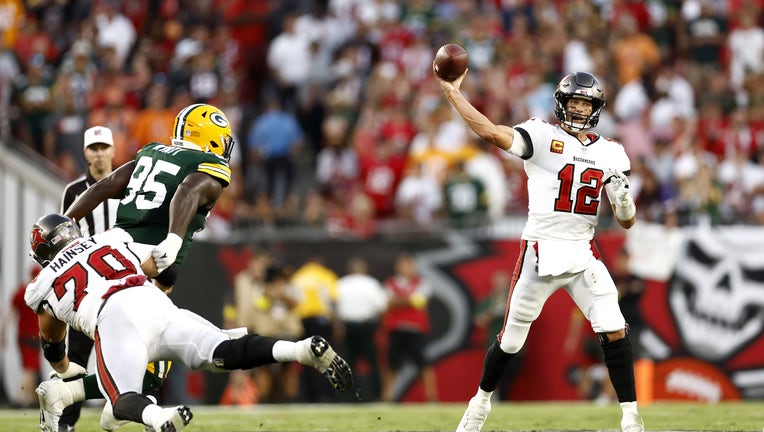 TAMPA, FLORIDA - SEPTEMBER 25: Tom Brady #12 of the Tampa Bay Buccaneers throws a pass against the Green Bay Packers during the fourth quarter in the game at Raymond James Stadium on September 25, 2022 in Tampa, Florida. (Photo by Douglas P. DeFelice

TAMPA, Fla. - With the game on the line, Tom Brady shook off the Buccaneers' offensive struggles and looked like the quarterback fans remember.

Still, the Tampa Bay Buccaneers had a chance against the Green Bay Packers after Brady connected with Russell Gage on a 1-yard touchdown with 14 seconds left. But a delay-of-game penalty pushed the 2-point conversion back to the 7 and Brady’s pass fell incomplete, giving the Packers a 14-12 victory Sunday.

The Bucs averaged just over 17 yards per possession on their first 11 possessions against the Packers, but drove the ball 89 on their final drive to score their first and only touchdown of the game.

"We've got to understand that we are that type of team," said Bucs wide receiver Russell Gage. "That, earlier in the game, that's not who we are. That's not who we want to be. That last drive is what we are capable of. What we know we can be."

The Bucs found the end zone, but failed to finish, needing a 2-point play for the tie after another self-inflicted wound: a delay of game penalty that further limited Tampa's chances to send the game to overtime

"Just looked up and we had a, just a bad execution," said Brady.

"I think we got the play off late," said Leonard Fournette. "I mean, that was it."

As bad as the Bucs' offense looked for the first 57 minutes of the game, the ball was in Tom Brady's hands.

He's had 42 4th-quarter comebacks and 53 game-winning drives in his career. Had he completed this one, he would have owned the all-time NFL record.

"Tom is a phenomenal quarterback to be able to block for," said Bucs left guard Luke Goedeke. "It's an absolute honor. Just all the game-winning drives over the years, and came up a little short on that one, but that was just there with it."

The Bucs have regressed from being the highest-scoring team in the league, in 2021, to a team that has scored three offensive touchdowns in their first three games of this season.

"You're not going to win a lot of games scoring a touchdown a game," said Bucs tight end Cameron Brate. "You don't want to point to guys being [injured]. We just have to figure out sustained drives and stay ahead of the sticks. You know, we have a lot of talent on offense, but doesn't mean anything if you're not scoring points."