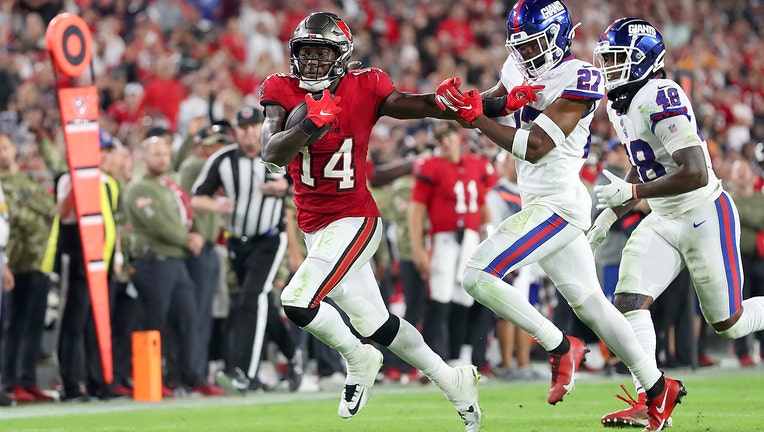 TAMPA, Fla. - Chris Godwin has become Tom Brady’s go-to guy, with 25 receptions in the last two games. Godwin, who is supposed to be the Buccaneers' No. 2 wide receiver, has 29 more receptions than anyone else on the team.

"He's playing incredible," said Brady. "Even the year before I got here, obviously he had an incredible kind of breakout year where the whole league understood how great Chris was. Before I met him, just his work ethic, watching him, and then getting to know him and just seeing how much he puts into it week-in and week-out, it's really amazing to watch. He's an incredible player, great teammate, cares about everybody on the field. Just a great competitor. He's just come up huge in some big moments and he's having a great season. It's not surprising to any of us because we see it every day, but he's really an amazing player."

He’s as good as they come, if you ask Byron Leftwich.

"Whatever we ask him to do, he’s able to do it. Like, I tell you guys all the time, I’m putting him on linebackers. I’m having him block. I’m giving him responsibilities that you normally wouldn't give wide receivers and he’s always [up] to the challenge," Leftwich said. "The biggest thing from a coach is that you can trust him. You can trust that he’ll do the right thing in whatever moment, if you’re prepared for it or not, because sometimes things just happen on the grass. He’s always been capable and smart enough to make the right play at all times. It’s priceless to have a player like that [with what] we ask him to do week-in and week-out. He’s a special guy."

Godwin can eclipse the 100-reception mark Sunday against the Saints with eight catches. He would be the second player in team history to achieve that and needs just 17 catches in the final four games to break the Bucs' all-time record, held by Keyshawn Johnson with 106 receptions in 2001.

"I was kind of shocked and I didn't know that I was that close to it," said Godwin. "I think it would be cool. It's a cool feat especially knowing that it's only happened once in Bucs history."

You might think with all the receptions Godwin is making, that’s all he’s doing, but what makes Godwin so valuable to the Bucs offense is blocking, opening up players for others.

"It opens up lanes for the running backs, I know that," said Leftwich. "I know they’re appreciative of it. In order for those guys – when you play wide receiver – to get the ball, you need five offensive linemen, six guys blocking and somebody has to throw it. So, when we’re running it, I stress to them on how important it is for them as wide receivers to be connected to guys to get their job done also because you can’t do one without the other. Just like we can’t throw it to them without guys blocking. You can’t really run the ball unless your skill guys are blocking also."

"I do enjoy blocking," said Godwin. "I enjoy just doing whatever I can to help the team. That’s kind of how I approach the whole thing. We’re all out there together giving it our all. The offensive line, they do a great job blocking for the quarterback. Running backs do the same. Those things by turn help receivers be able to get the ball. I see it as me doing my part and reciprocating that love. They help us and we help them."