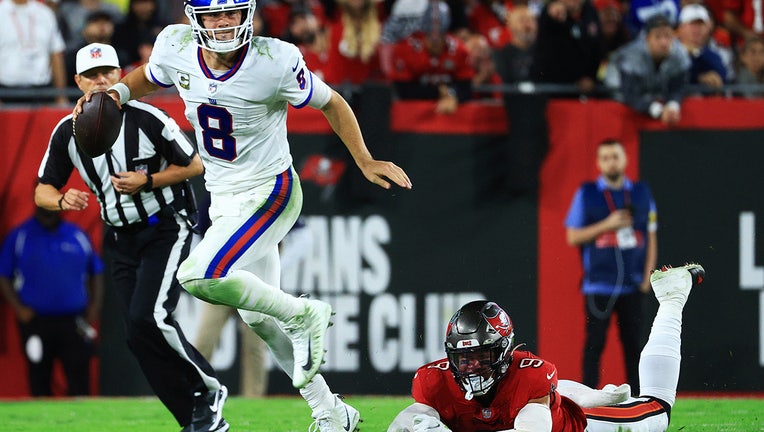 Daniel Jones scrambles against the Tampa Bay Buccaneers during the second half at Raymond James Stadium on November 22, 2021 in Tampa, Florida. (Photo by Mike Ehrmann/Getty Images)

TAMPA, Fla. - The Buccaneers' defense at times has been dominant, but there have been too many breakdowns. Too often are their opponents getting into the end zone. The Bucs have surrendered 26 and a half points per game over the last four weeks.

"I think our consistency comes from just executing and I think finding new ways to stay healthy," explained Ndamukong Suh. "I think we hit the injury bug a fair amount just because everybody has to deal with it at some point during the season. It’s important for the next man to stand up and be able to fill in the roles when needed when your name is called."

Stopping teams on third down has been the Bucs' weakness. They've racked up just five sacks this season, which is tied for last in the NFL.

"The big thing is to get the secondary back and being able to mix up our coverages," said Bruce Arians. "When we're playing some man, we've gotten some sacks. If you're playing a ton of zone, pro quarterbacks have a chance to pick you apart pretty quick. We've got blitzes coming but they get the ball out of their hands too fast. Being able to mix it up."

The Bucs are in the final stretch of the regular season with one of the easiest schedules left. Four of their remaining six games are against divisional opponents. Despite holding a three-game lead in the NFC South, the Bucs aren't about to take their division rivals lightly.

RELATED At 7-3, the Buccaneers are underachieving

"There's still a long way to go," stated Arians. "The Saints are a hell of a football team. That defense – I'll never cross them out. Carolina has played good and bad and Atlanta is a game out of the playoffs. Three-game lead right now – we've got a long way to go."

The Bucs haven't won a division title in 14 years, but they know right now the NFL South is theirs to win.

"The expectations for us are to go out there and win the division," commented Suh. "That’s the first step, especially getting into the playoffs. You do that and take care of business – you know that you’re going to be at home for your first playoff game and go from there. Obviously, it helps when you get that done. Last year, we took a tougher road and that’s the path that we put ourselves into by not taking care of business, so we’re in a position where we can control our own destiny and we want it to remain that way."