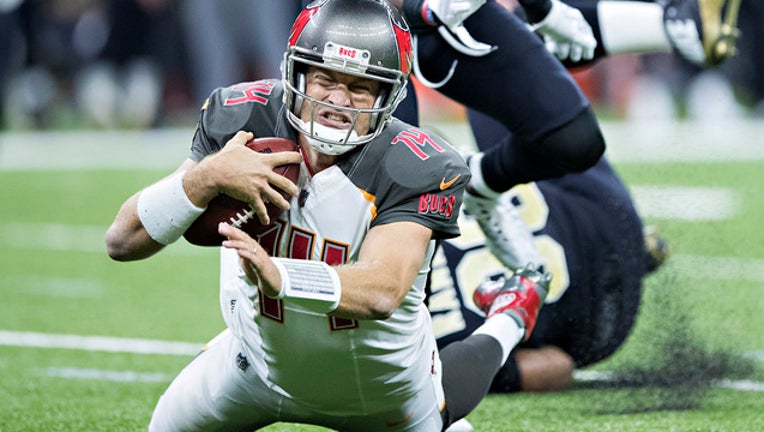 Ryan Fitzpatrick is tackled from behind against the New Orleans Saints on November 5, 2017 in New Orleans, Louisiana. (Photo by Wesley Hitt/Getty Images)

There were two lost fumbles, one on Alvin Kamara's run and another on Willie Snead's muffed punt. Wil Lutz missed a 43-yard field goal and had an extra point blocked. Brees missed a deep throw to Ted Ginn when the speedy receiver was behind the Bucs' defense. The Saints' kickoff return unit also botched a trick play .

In the NFL, teams generally need to be playing well to overcome all that. New Orleans overcame it to the tune of a 30-10 rout.

"By no means was it perfect out there," Brees said. "I felt like we had some opportunities to score" more points.

The Saints (6-2) are now riding a six-game winning streak, longer than any streak they had during their last playoff season in 2013, and their longest since 2011. Four of the victories have been by two touchdowns or more. None was closer than eight points.

Against Tampa Bay, the Saints made their share of big plays. There was Kamara's serpentine, 33-yard touchdown on a screen pass and Ginn's 36-yard score on a pass over the middle. Undrafted rookie Justin Hardee scored New Orleans' first TD when he blocked a punt and recovered it on the run.

Defensively, the Saints continued to look like world beaters in what has been a stunning turnaround from New Orleans' 0-2 start, during which the same unit gave up 1,025 yards and 65 points.

"We started out being one of the youngest defenses in the league," said defensive end Cameron Jordan, who had 1 1/2 sacks against Tampa Bay. "I could not be prouder of our defense and the way that they are playing."

The Bucs (2-6) lost their fifth straight, and their frustration boiled over during a scuffle that involved quarterback Jameis Winston and receiver Mike Evans.

Winston, who lasted only a half while playing with a shoulder injury, instigated the third-quarter dust-up when left the sideline and pushed his finger into the back of rookie cornerback Marshon Lattimore's helmet. Lattimore shoved back and then Evans decked Lattimore from behind, drawing an unnecessary roughness flag.

Evans berated himself for being childish and malicious. Winston, whose playing status for next week is uncertain, acknowledged that he's not dealing well with the disappointment of a season that began with a lot of promise after the Bucks narrowly missed the playoffs a year ago.

Some other things to know about New Orleans' victory over Tampa Bay:

RARE TURNAROUND: The Saints are only the third team in the Super Bowl era to follow an 0-2 start with six straight victories. The other two teams that did that - 1993 Dallas Cowboys and 2007 New York Giants - both won Super Bowls.

PASSING DOWNTURN: Tampa Bay arrived in New Orleans with the NFL's second-ranked passing game, but managed only 113 yards through the air against a Saints secondary featuring rookies Lattimore and safety Marcus Williams, along with and second-year cornerback Ken Crawley and second-year safety Vonn Bell.

BREES' HOUSE: Brees' two touchdown passes gave him 225 in his career in the Superdome. That's the most in NFL history by a quarterback in the same stadium. He completed 22 of 27 passes (81.5 percent) for 263 yards with no interceptions.

HARD YARDS: Tampa Bay also struggled to run, finishing with 87 yards on 25 rushing attempts. Doug Martin had 7 yards on eight carries. Fitzpatrick's 30 yards on three scrambles made him the Bucs' second-leading rusher behind Peyton Barber, who had 34 yards on 11 rushes.

BIG BOUNCE: Hardee was a receiver at Illinois, and felt like one again as he located the rebound of his punt block, watched it into his hands and waltzed into the end zone for his first career touchdown.

The timing could not have been much better. His father and aunt were at their second Saints game, and first in the Superdome.