TAMPA, Fla. - The Buccaneers' defense made a strong statement right from the start holding the Dallas Cowboys from finding the end zone. The Bucs were the only team in the NFL to accomplish that in week 1 of the NFL season.

"Phenomenal," stated Mike Edwards. "They're an NFL team, so for us to hold them to 3-points and not let them get into the end zone. Great job. It says a lot about our defense."

The Bucs have now held their opponents in the regular season to under 10-points in three of the last five games. So what is it about a Todd Bowles defense that makes it so difficult to penetrate?

"His disguises are crazy," explained Carlton Edwards III. "You never know when the blitz is coming or where they're coming from. He's really versatile and how he likes to bring pressure."

Bowles is the master of disguise. A perfect example came in the third quarter against Dallas. Lavonte David and Mike Edwards came up to the line showing blitz and the Bucs dropped both of their outside linebackers into coverage. Both Edwards and White blitzed leading to a sack of Dak Prescott by White. It's a defense designed to disguise. 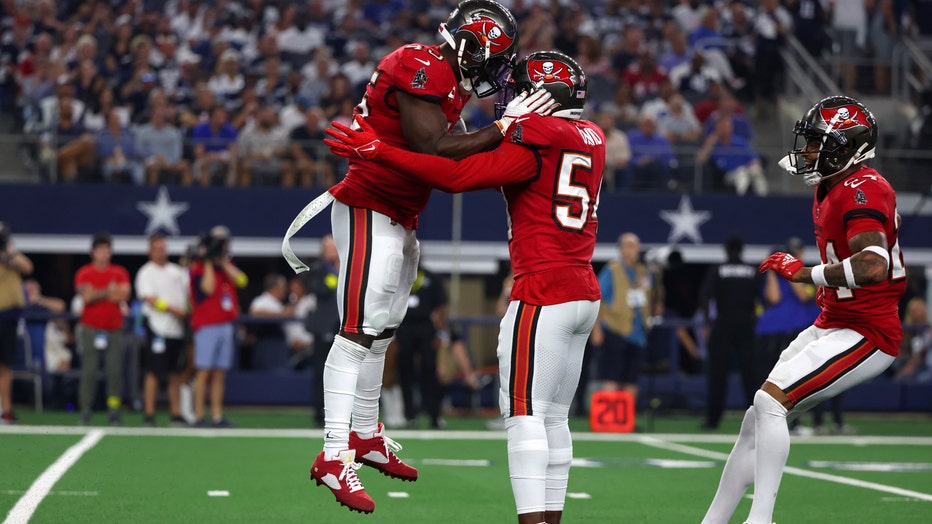 ARLINGTON, TEXAS - SEPTEMBER 11: Devin White #45 of the Tampa Bay Buccaneers and Lavonte David #54 celebrate during the second half against the Dallas Cowboys at AT&amp;T Stadium on September 11, 2022 in Arlington, Texas. (Photo by Richard Rodrig

"The better blitzer got the sack," joked Devin White. "Just put the tape on and you know I made the perfect move. They actually both blocked me. He didn't know what to do so I had to go clean it up."

Since taking over the Bucs' defense in 2019. Bowles defenses have been regarded as one of the best. Allowing the fewest rushing yards, most quarterback hits and scoring points off turnovers. Lead Hall of Famers Warren Sapp, Derrick Brooks and John Lynch the 2002 Bucs defense is considered the greatest in franchise history. Does Bowles Bunch feel they top that team?