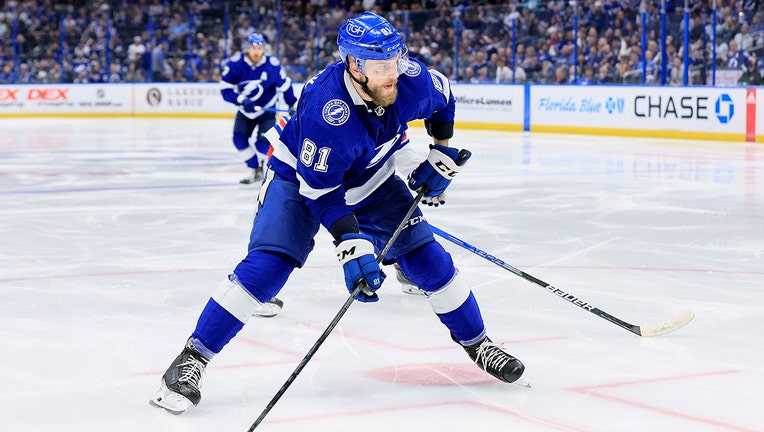 TAMPA, FLORIDA - JUNE 11: Erik Cernak #81 of the Tampa Bay Lightning skates with the puck against the New York Rangers during the second period in Game Six of the Eastern Conference Final of the 2022 Stanley Cup Playoffs at Amalie Arena on June 11, 2

DENVER, Colo. - The Tampa Bay Lightning are doing exactly what they set off to do from the very beginning. Just four games stand between the Bolts and becoming Stanley Cup champions for the third year in a row.

Of course, the team and fans know they can’t get ahead of themselves just yet. It's not over until it's over.

That’s because both of these teams – Both the Bolts and the Colorado Avalanche are going to be playing for a chance to make history. The Avalanche have not been to the Stanley Cup Final in over 20 years. They finished as the top team in the Western Conference, Sweeping the Oilers during their conference final to advance for a chance to play for the Stanley Cup.

During the regular season, the Avalanche did beat the Lightning twice –  but the playoffs are a whole different story.

Winning a third Stanley Cup in a row has been the Bolts driving force all season long. Only five other teams have ever won three straight Cups, but no team has been able to pull that off in nearly 40 years. Now, the Lightning are focused on how to beat the highest-scoring team in the playoffs.

Games 1 and 2 will be taking place in Colorado. There will be a watch party Wednesday night, so fans can cheer the team on. The doors will open to Amalie Arena at 7 p.m. There will be concessions, appearances from Thunder Bug, live entertainment, and, of course, thousands of fans cheering on the Lightning as well. It’s only $10 to get inside.

One of the bigger questions is whether Brayden Point will be able to play. He has been back out on the ice practicing. Coach Jon Cooper said they were waiting to see how he felt Wednesday but that he would for sure be back for Game 2.

Point said, "I don’t think anything is guaranteed" and added he’s enjoying just practicing with teammates again. Still, given the stakes and Point’s visible improvement a return is likely. If so, he won’t face any artificial minutes restriction.

"He’s an elite player in this league, and he will play his minutes according to how he’s responding," Cooper said. "A lot of it’s going to be on how he’s feeling. I wouldn’t classify that Pointer’s going to be sitting on the bench a whole lot if he’s healthy. He’ll be out there."

The Lightning were missing only winger Brandon Hagel for their first practice in Denver, though the key trade deadline acquisition skated Monday in Tampa. Colorado is facing injury questions of its own with forwards Nazem Kadri (thumb) and Andrew Cogliano (hand) questionable for Game 1 and beyond.

While Tampa Bay’s Pat Maroon, who won with St. Louis in 2019, goes for a fourth consecutive championship, first-year teammate Corey Perry is in a very different position. Perry is the final for a third year in a row with three different teams after losing to Tampa Bay with Dallas in 2020 and Montreal in 2021.

Perry is the first player since Marian Hossa (2008 Penguins, 2009 Red Wings and 2010 Blackhawks) to do that. Hossa lost the first two before winning with Chicago.

"It has been a strange road," Perry said. "Hopefully the third time’s the charm."