Bucs expect a lot of ‘juice’ from O.J.

TAMPA, Fla. - When O.J. Howard was carted off the field in Week 4 after tearing his Achilles tendon, it ended his season for the third time in his four-year career. Once again, he was the forgotten man – this time during a Super Bowl season.

The recovery process took a toll.

"I would just say mentally, more than anything," said Howard. "Really not physical, just trying to stay focused and trust the team that I have – the rehab doctors that I have and the training staff here – that we were going to get back to where I want to be. It was a slow process. It was long, but it worked out. That was the hardest thing just staying focused on that and knowing that everything would be OK."

Now fully recovered, O.J. has been counting down the days to kickoff. He's eager to shed his injury-prone image and can't wait to run out of the tunnel to face the Cowboys.

"It’s going to feel great," said Howard. "It’s a moment that I’ve always been playing in my head over and over again. To get back on the field, I’m just so excited. Not just for me to get back out there, but for us to have the fans back also. It’s going to be a big moment so I’m just going to try and stay in it and enjoy it."

Former longtime NFL executive Mike Tannenbaum, who now is an ESPN analyst, believes Howard will be the X-factor in the Bucs’ deeply talented offense. Tom Brady is also expecting a lot of juice from O.J. 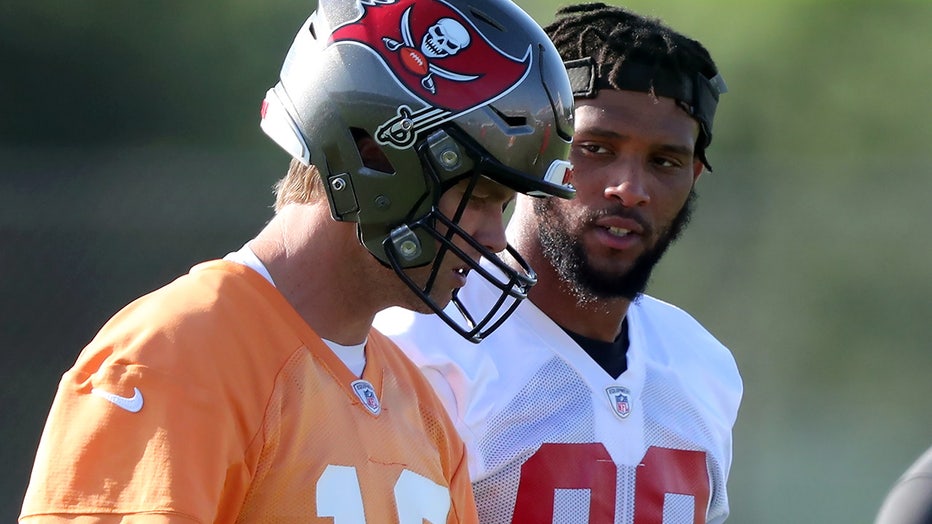 Tom Brady and O. J. Howard talk as they walk from one field to another during training camp on July 26, 2021. (Photo by Cliff Welch/Icon Sportswire via Getty Images)

"He looks really good," agreed Rob Gronkowski. "I love working out there with O.J. Love lining up next to him. He's just a freak of an athlete. He can run super fast. He can get out of breaks really fast. He's a very reliable blocker when he's next to me...O.J. is the man. It's great to see him back out there with all the hard work that he put in to come back from such and injury."

The Bucs have arguably the best tight end trio in the league. If O.J. stays healthy, he's the one poised to come out on top.