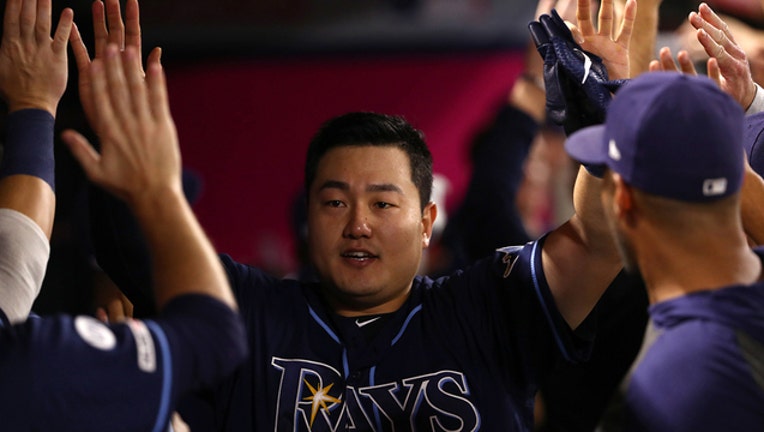 ANAHEIM, Calif. - The Tampa Bay Rays couldn't get much going offensively in eight of their nine innings. When they got their only serious scoring opportunity, Travis d'Arnaud seized it.

To manager Kevin Cash, that's what separates playoff teams from the pack - and the Rays sure look like they're a cut above the rest.

D'Arnaud broke open a scoreless game with a three-run double in the sixth inning, and the Rays improved their standing in the AL wild card race with their 13th win in 16 games, 3-1 over the Los Angeles Angels on Saturday night.

D'Arnaud's drive went over the head of left fielder Michael Hermosillo to clear the bases for the Rays, who struggled for five innings against Angels starter Jaime Barria (4-9) before breaking through.

Although the Rays managed just five hits, their second straight victory coupled with Cleveland's two losses in a doubleheader at Minnesota left Tampa Bay (89-61) 2 ½ games clear of the Indians (86-63) for the second wild card spot. After missing the postseason last year despite winning 90 games, Tampa Bay is closing in on its first playoff berth since 2013.

"We had to find a way to get one across, and we were fortunate to get three," Cash said. "Whatever the situation is, you've got to win. Obviously I'm scoreboard-watching, but the way you control it is by winning games."

The Rays also proved to be resourceful on the mound. Trevor Richards (6-12) pitched two innings of two-hit ball in relief of starter Tyler Glasnow, and Emilio Pagán pitched the ninth for his 20th save after former Angels reliever Oliver Drake struck out the side in the eighth.

"I knew this club had a chance to be special," Pagán said. "They were special last year, and we've added some really talented players. We're going to have a chance, but it's up to us to get there."

Mike Trout missed his sixth straight game with a foot injury for the Angels (67-82), who have lost six straight and 10 of 12. They have clinched four straight losing seasons for the first time since 1993-96, also the last four years the franchise was known as the California Angels.

"That's definitely one of my better outings," Barria said through a translator. "The last couple were kind of shaky. In the sixth inning, I started going to my slider a little more out of respect for their power, and I think I got a little tired."

The Angels made three pitching changes in the sixth in an attempt to keep it scoreless, but Hermosillo couldn't find the proper line when d'Arnaud absolutely smoked his drive off Taylor Cole.

"I didn't think it was catchable off the bat," Angels manager Brad Ausmus said. "I think it probably covered too much ground too quickly for (Hermosillo) to get under it."

Los Angeles got its run in the seventh when Nick Anderson hit Hermosillo and then threw two wild pitches to advance him.

Glasnow gave up two hits over three innings in his second start back from a four-month injury absence for Tampa Bay. The hard-throwing right-hander from the Los Angeles area was on a pitch count in his return from a right forearm strain, but he showed off his 99-mph fastball while striking out five.

"It's just nice to come out and have a lot of family here," Glasnow said. "The whole atmosphere is great here, and I thought my stuff was really sharp."

Ji-Man Choi's franchise-record streak of reaching base in 10 straight plate appearances ended when the Tampa Bay slugger was called out on strikes after an eight-pitch at-bat in the second inning. His streak matched the longest in the majors since Trout reached in 11 straight in 2017.

Angels: Trout hasn't played a full game since Sept. 5 while dealing with pain from an irritated nerve in his foot. He plans to play Sunday in the series finale, and he doesn't want to be shut down for the season. Trout began Saturday atop the AL homers race with 45.

Ryan Yarbrough (11-3, 3.51 ERA) looks to stay unbeaten since June 18 when he takes the mound for the Rays in the series finale. He faces Angels rookie Patrick Sandoval (0-3, 5.28 ERA), who makes his eighth career start.