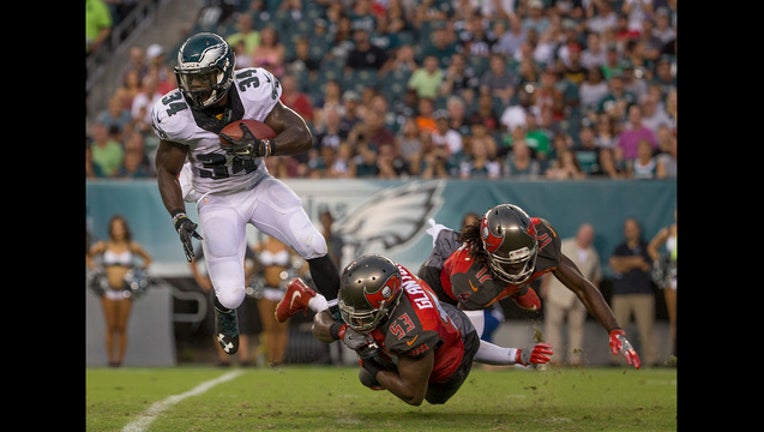 Adarius Glanton #53 and Donteea Dye #17 of the Tampa Bay Buccaneers make a tackle against Kenjon Barner #34 of the Philadelphia Eagles at Lincoln Financial Field on August 11, 2016 in Philadelphia, Pennsylvania. (Photo by Mitchell Leff/Getty Images)

PHILADELPHIA (AP) - Philadelphia needed 97 seconds to score its only touchdowns Thursday night in beating sloppy Tampa Bay 17-9 in the preseason opener for both teams.

The Eagles covered a mere 27 yards on their two drives to the end zone, with each series lasting three plays after Buccaneers fumbles. Ryan Mathews had a 5-yard TD run to make it 7-0 after Tampa Bay fumbled the opening kickoff. Chase Daniel scooted 3 yards for the second score after Jameis Winston had the ball stripped.

No. 2 overall draft pick Carson Wentz played just more than a half as Eagles quarterback and, as could be expected, was inconsistent. Perhaps his most noteworthy play came when he went flying acrobatically on a fourth-quarter run after a classic tackle by Bucs rookie cornerback Javien Elliott. The QB quickly bounded to his feet, later admitting he needed to make sure not to land on his neck.

Caleb Sturgis made a 42-yard field goal for Philly's other points. Winston connected with Russell Shepard for a 26-yard touchdown for Tampa Bay, whose second-round selection, Roberto Aguayo, added a 38-yard field goal.

Buccaneers second-year receiver Kenny Bell, a fifth-round draft pick last year who did not play in 2015, fumbled the opening kickoff, setting up an Eagles touchdown. On Tampa Bay's second offensive series, Philadelphia star lineman Fletcher Cox stripped the ball from Winston on the first play, then fell on it at the Bucs 9. Three plays later, Daniel ran in for a 14-0 lead.

Eagles: "It still felt like a football game, playing ball. A new offense, a new facility, but still football." — Wentz on his pro debut.

Eagles: "I think we have to be the unit that takes over. WE have to beat the guys, especially the guys up front. We have to just take over games and be disruptive." — Cox on his team's defense.

Bucs: "Horrendous start. Fumble the opening kickoff, missed extra point, you just can't do it. Not what I had in mind for the start, for preseason Game 1." — Buccaneers coach Dirk Koetter, who like Philadelphia's Doug Pederson was making his NFL head coaching debut.

Eagles: Lost starting left guard Brandon Brooks on the first series with a right biceps injury. Pederson said it was not serious.

Buccaneers: Aguayo — yes, Tampa Bay took a placekicker at No. 59 overall in April — saw his first kick, an extra point try, clang off the left upright and fail. Safety Isaiah Johnson had a 35-yard return of an interception.

Eagles: Wentz came on in the second quarter to run the two-minute offense. His first throw was high off the hands of Nelson Agholor, but his next was a sharp 15-yard throw on the run to Zach Ertz. Wentz 12 of 24 for 89 yards and one interception. Wentz was plagued by receivers' drops, and took a hard hit late in the game. He appeared shaken up, but remained in for one more play.

"It was fun," Wentz said. "My first opportunity running the two-minute drill."

Safety Quentin Gause had a pick on a tipped pass that set up a fourth-quarter field goal. Cornerback C.J. Smith clinched it with an end-zone interception in the final seconds.

Tampa Bay had four sacks of Daniel, who rarely had time to look downfield before he had to scramble or went down. He also threw to no one from his end zone while pressured, but the officials ruled a receiver was nearby, avoiding a safety. Daniel threw for 15 yards and lost 19 on sacks.

Philadelphia had three sacks, one each by Cox and Steven Means, a half apiece for Connor Barwin and Beau Allen.

It was 91 degrees at kickoff with a heat index of 100 degrees. It did not cool off much all night at the Linc.