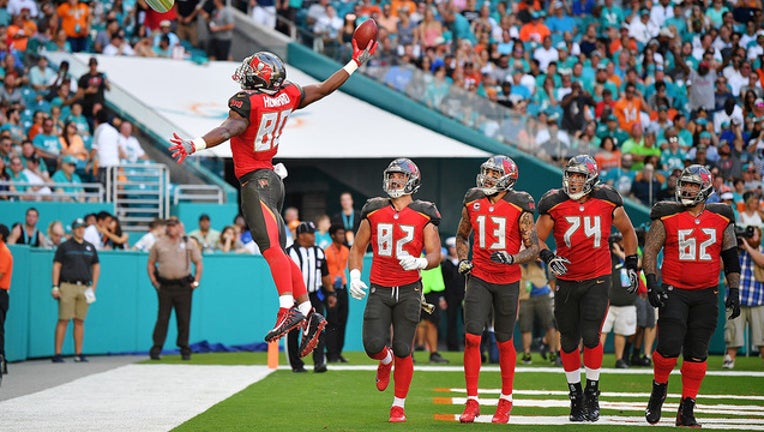 O.J. Howard celebrates after scoring a touchdown during the second quarter against the Miami Dolphins. (Photo by Mark Brown/Getty Images)

O.J. Howard and DeSean Jackson caught those scoring throws for the Buccaneers, who outscored Miami 17-0 in the second quarter.

They also stuffed three straight 1-yard-to-go runs by the Dolphins at the Tampa Bay 34 in the fourth quarter, forcing a turnover on downs on a day where Miami had more mistakes than points.

Miami (4-6) tied the game at 20-20 on a 61-yard touchdown pass from Matt Moore to Kenny Stills with 3 minutes left. Fitzpatrick coolly moved the Buccaneers 58 yards on the ensuing drive, and Murray delivered what essentially was the winner.

Adarius Glanton got a bonus touchdown for Tampa Bay (4-6) on the final play, when the Dolphins' lateral-filled last-ditch attempt at a kickoff return turned into a Bucs' score.

Jay Cutler threw three first-half interceptions and didn't play in the second half because of what the Dolphins said was diagnosed as a concussion. Moore went 17 of 28 for 282 yards and the touchdown in relief, but Miami couldn't overcome five turnovers and 17 penalties - one shy of the franchise all-time record.

Stills caught seven passes for 180 yards, and Jarvis Landry had six catches for 95 yards and another touchdown for Miami, which has lost four straight for the first time since 2013.

A pair of short drives gave the Bucs control in that big second quarter. Howard's score came on a two-play, 6-yard drive after an interception, and Jackson's score capped a four-play, 37-yard drive following a Miami fumble.

The Dolphins had their three longest passing plays of the season - the 61-yard touchdown pass to Stills, a 49-yarder to Landry and another 45-yard strike to Stills. Before Sunday, Miami's longest pass play was a 36-yard throw from Cutler to Stills against the Jets on Oct. 22.

Buccaneers: RG Evan Smith left in the first half and was diagnosed with a concussion.

Dolphins: Besides Cutler's concussion, the Dolphins lost RG Jermon Bushrod in the third quarter to a left foot injury. LB Chase Allen, who started in place of Rey Maualuga - who was arrested early Saturday in a dispute over a bar tab and quickly waived by the Dolphins - also was evaluated for a concussion in the second half. LB Stephone Anthony had a knee injury, the specifics of which were not announced.

Buccaneers: Visit Atlanta on Nov. 26, the second game in a three-week stretch of road contests.

Dolphins: Visit New England on Nov. 26, the start of a three-week stretch where Miami will see the Patriots twice.