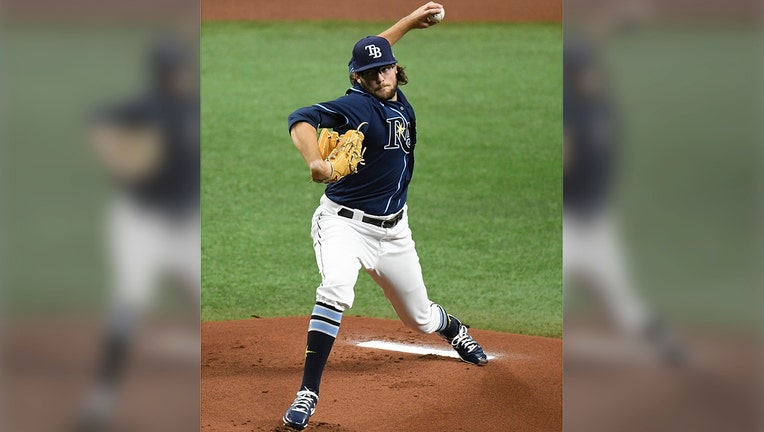 josh Fleming throws a pitch during the first inning against the Miami Marlins at Tropicana Field on September 04, 2020 in St Petersburg, Florida. (Photo by Douglas P. DeFelice/Getty Images)

Yoshi Tsutsugo homered for the Rays, who have won 20 of 25. Tampa Bay has a nine-game winning streak against Miami.

The Marlins got homers from Corey Dickerson and Jesús Aguilar.

Fleming (3-0) allowed four runs and seven hits over five innings in joining Jake Faria (2017) and Jeremy Hellickson (2010) as the only Rays pitcher to win their first three major league starts.

Nick Anderson, the fourth Tampa Bay reliever, worked out of a two-on, no-out jam in the ninth to get his fourth save.

After Kevin Kiermaier drew a bases-loaded, two-out walk on a 3-2 pitch in the fourth from Pablo López (3-3), Perez put the Rays up 5-2 on his bases-clearing double.

Jon Berti got the Marlins within 5-4 on his two-run double in the fifth that just went over a leaping Kiermaier in center.

Dickerson homered in the third and Aguilar connected one inning later to make it 2-1.

Tsutsugo hit a solo shot during the second.

The Rays completed their season series with New York Yankees on Wednesday with a road win to finish 5-1 in the Bronx and 8-2 overall. Still, the lack of fans at Yankee Stadium was evident.

“They make the place,” Tampa Bay lefty Blake Snell said. “I’m going to tell you, New York without fans is not New York. New York with fans, that’s a fun place to play.”