CLEARWATER, Fla. - Bobby Finke returned to the University of Florida’s campus wearing two more championship medals. Less than a year after winning two Olympic golds, the Clearwater swimmer hauled in another pair at the World Championships in Hungry in June.

It’s been a record-setting year for the Florida Gator senior, going along with his golden Olympic moments in Tokyo.

On the world stage last week, Finke shined as he took home first place in the 800-meter freestyle and second place in the 1500-meter, along with staking claim to the title of America's fastest distance swimmer by smashing two U.S. records.

"It means a lot," Finke told FOX 13 Sports upon his return to the University of Florida. "Especially in the 800 [meter], just going into the Worlds, I was just trying to do the best I could, again. Just by the results and was able to do pretty well there." 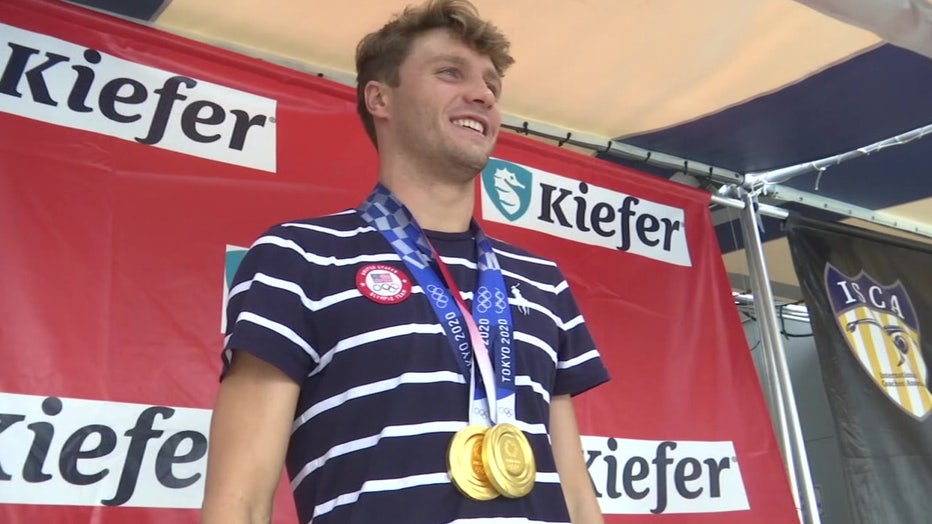 Bobby went from 4th place in the final 25 meters – to blowing past the world's best and claiming the gold.

"I don't want to walk away from the pool disappointed," said Finke. "Knowing I could have gone even a couple tenths faster."

Bobby is back in the pool in Gainesville, just a few days removed from the World Championships.

His summer isn’t over. He’s preparing for the Phillips 66 National Championships in California in August where the competition won’t match up to the talent pool he’s been swimming in.

What pushes Finke is his will to win.

Even outside the pool, he's ultra competitive at everything he does, especially when it's competing against his best friend and teammate, Kieran Smith.

"Especially in ping pong," laughed Finke. "We have a ping pong table downstairs [inside the locker room]. Kieran and I have a competition going. I don't know what the score is? I actually think I'm losing right now."

Finke won’t swim for the Gators with his extra year of eligibility, but he’ll continue training with the Gators and cheering them on this season with an eye on the 2024 Olympics.