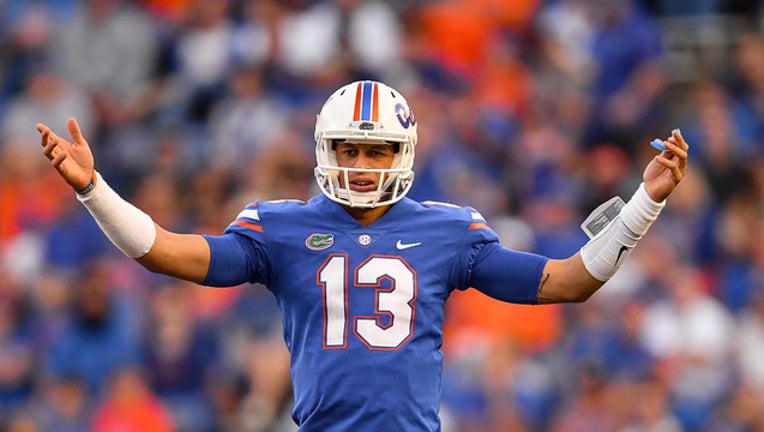 Feleipe Franks gestures during the first half of the game against the UAB Blazers at Ben Hill Griffin Stadium on November 18, 2017 in Gainesville, Florida. (Photo by Rob Foldy/Getty Images)

Coach Dan Mullen named Franks the team's starter to begin the season, saying Monday that his "ability to extend plays, some of his athleticism right now, will give us the best opportunity to win games."

It's not exactly a glowing endorsement for Franks, who will take the first snap when the Gators open against Charleston Southern on Saturday night.

Franks, a 6-foot-6 sophomore who started eight games in 2017, edged Kyle Trask in a competition that started in March and lasted through fall camp.

Franks threw for 1,438 yards in 11 games last season, finishing with nine touchdowns and eight interceptions. He had a few highlights, including a 63-yard touchdown pass on the final play to beat Tennessee 26-20 and a 79-yard run against Texas A&M a month later that was the longest by a Florida quarterback in school history.

Franks also was benched twice, once in favor of Luke Del Rio and again later in the year for Malik Zaire.

"His confidence is really high," receiver Josh Hammond said. "He's been through the worst and he feels like it's only up from now. He's definitely really confident and just ready to get out and compete."

Franks taking so long to secure the job could be considered an indictment of his ability, especially since Trask wasn't a starter in high school, missed all of last season following foot surgery and was slowed in camp by a blister on his throwing hand.

Mullen kept the job open until game week, giving Trask every opportunity to close the gap.

It never happened, and now Franks will start Florida's opener for the second consecutive season.

"What we looked at is we have some young quarterbacks that I think all have really bright futures in their development," Mullen said. "They're a long way (off). All of them are a long way from finished product of what we need to see."

Franks has ideal size and an NFL-caliber arm. But his accuracy and decision-making ability had him looking lost at times in 2017.

Mullen has repeatedly praised Franks' attitude, but he also made it clear he has to make major strides to get to the level that Alex Smith (Utah), Chris Leak (Florida), Tim Tebow (Florida) and Dak Prescott (Mississippi State) did under Mullen's guidance.

The Gators have had 12 starting quarterbacks since Tebow's departure in 2010 - John Brantley, Jeff Driskel, Jacoby Brissett, Trey Burton, Tyler Murphy, Skyler Mornhinweg, Will Grier, Treon Harris, Luke Del Rio, Austin Appleby, Franks and Malik Zaire - and none has proven to be a long-term solution for the team's long-standing problem.

None of them threw more than 12 touchdown passes in any season, and Florida has ranked no higher than 83rd in total offense since the 2009 season. The Gators finished six of those eight years ranked in triple digits.

Mullen was hired, in part, to fix Florida's floundering offense.

Franks is getting the first shot at making it happen.