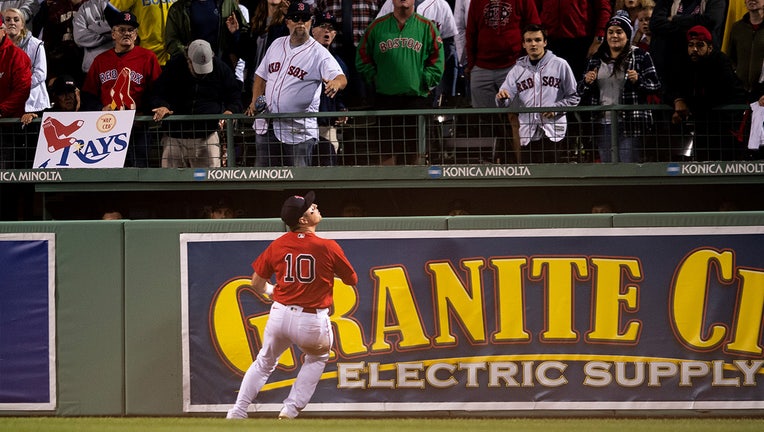 BOSTON, MA - OCTOBER 10: Hunter Renfroe #10 of the Boston Red Sox reacts as a ball is ruled a ground rule double during the thirteenth inning of game three of the 2021 American League Division Series against the Tampa Bay Rays at Fenway Park on Octob

BOSTON - Kevin Kiermaier’s line drive sailed over right fielder Hunter Renfroe’s head and bounced off the short wall in front of the Boston bullpen and back onto the warning track. It ricocheted off Renfroe and into the air.

The Red Sox right fielder waved at it desperately -- and unsuccessfully -- to keep it from going out of play.

It’s a good thing he couldn’t.

Saved by an obscure rule and a bounce that was weird even for quirky Fenway Park, the Red Sox staggered Tampa Bay 6-4 Sunday night on Christian Vázquez’s 13th-inning walk-off homer to move one victory from eliminating the 100-win Rays from the AL Division Series. 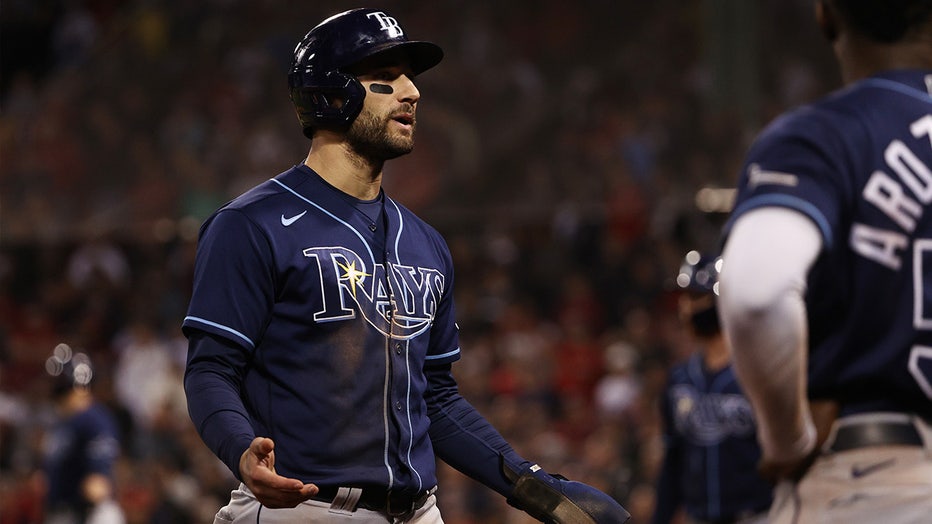 BOSTON, MASSACHUSETTS - OCTOBER 10: Kevin Kiermaier #39 of the Tampa Bay Rays reacts after his ground rule double in the 13th inning against the Boston Red Sox during Game 3 of the American League Division Series at Fenway Park on October 10, 2021 in

"I was speechless," said center fielder Kiké Hernandez, who had come over to back up Renfroe. "I don’t know if you guys have seen that before. I’ve never seen that before in my life.

"I wasn’t sure what was going to get called. I wasn’t sure if the runners had to return. ... Like, I had no idea," he said. "Luckily, it went our way. And you call it home-field advantage if you want — call it whatever you want — but we won."

The wild-card Red Sox took a 2-1 edge in the best-of-five matchup. Game 4 is Monday at Fenway -- Marathon Day in Boston -- with Game 5 in St. Petersburg, Florida, on Wednesday, if necessary.

Tampa Bay rallied from a 4-2 deficit to tie it in the eighth inning and it was still 4-all when Yandy Diaz singled with one out in the 13th.

Then came the play that had the umpires scurrying for the rulebook and the Rays scratching their heads.

Diaz was halfway from second to third when Kiermaier’s ball bounced over the 5-foot-high wall, and he easily would have scored had it remained in play. But the umpires conferred and went to the headsets before awarding Kiermaier a double and sending Diaz back to third.

Hundreds of Rays fans gathered Sunday night to cheer their team from afar.

Baseball Rule 5.05(a)(8) states: "Any bounding fair ball is deflected by the fielder into the stands, or over or under a fence on fair or foul territory, in which case the batter and all runners shall be entitled to advance two bases."

"If I stayed at second, that’s fine," Kiermaier said. "But I was hoping to see that Yandy scored, because he would have scored obviously. … It’s incredible that it worked out to their advantage just like that."

Rays manager Kevin Cash said he watched the replay and it was obvious Renfroe didn’t knock it over the wall on purpose.

"That’s just the rule. That’s the way it goes. It was very unfortunate for us," he said. "I think it was fairly obvious that K.K. or Yandy was going to come around to score, but it didn’t go our way."

Said umpire crew chief Sam Holbrook: "It’s in the rulebook. It’s a ground-rule double. There’s no discretion that the umpires have."

When play resumed, Nick Pivetta struck out Mike Zunino to end the inning and came bounding off the mound in celebration.

Renfroe walked with one out in the bottom half, then Vázquez hit the first pitch from Luis Patiño over the Green Monster to end it.

Hernández and Kyle Schwarber each had three hits, including a homer, for Boston.

Hernández singled in the first, singled in the third and homered in the fifth to give him seven consecutive hits in the series. He went 5 for 6 with a home run and three doubles in Boston’s Game 2 win, becoming the first Red Sox player ever with four extra-base hits in a postseason game.

Red Sox ace Nate Eovaldi allowed Austin Meadows’ two-run homer in the top of the first, but Schwarber led off the bottom half with a home run. Hernández’s fifth-inning homer gave Boston a 4-2 lead, but the Rays tied it in the eighth when Wander Franco hit a solo homer and Meadows and Randy Arozarena doubled.

Garrett Whitlock struck out Zunino to end the inning.

With a runner on first in the 10th, J.D. Martinez fouled off five pitches with two strikes and then hit one to straightaway center, where Kiermaier pulled it in right in front of the 379-foot marker. (The wind was blowing in.)

In the 11th, Arozarena stole second and was caught in a rundown on his way to third, but he scrambled back to the bag safely. But he was stranded there when Pivetta struck out Zunino and Jordan Luplow to end the inning.

Boston had a runner on first in the 11th when Hernández hit a chopper into the hole between short and third. Franco went to his right to field it, then made a long throw that first baseman Luplow picked out of the dirt for the third out.

Schwarber, a star of the Cubs’ 2016 World Series title who homered in the wild-card game against the Yankees, also singled and scored in the third, when Boston scored a pair of runs to chase Drew Rasmussen and take a 3-2 lead. He singled in the ninth before leaving for a pinch-runner.

But it was Schwarber’s play in the field that endeared him to the Fenway fans.

After earning an error when he lobbed the ball over pitcher Nathan Eovaldi’s head on a grounder in the third inning, Schwarber was tested on a similar play made a more accurate toss in the fourth.

He celebrated by raising both arms in the air and giving a fist pump, then tipping his cap to the cheering fans. Schwarber turned toward the dugout and laughed.

Rays: Arozarena slipped on his way to second base on his eighth-inning double, then limped into the dugout while the Red Sox changed pitchers. But he remained in the game.

Red Sox: RHP Hansel Robles appeared to be experiencing discomfort after striking out Diaz for the second out in the eighth. He winced and stretched his shoulder, then gave up Arozarena’s double to tie it 4-4.

The teams play again on Monday night, with the starters to be announced. Nick Pivetta had been expected to start for Boston and Patiño for the Rays, but both pitched in Game 3. Red Sox manager Alex Cora said it would most likely be Eduardo Rodriguez.