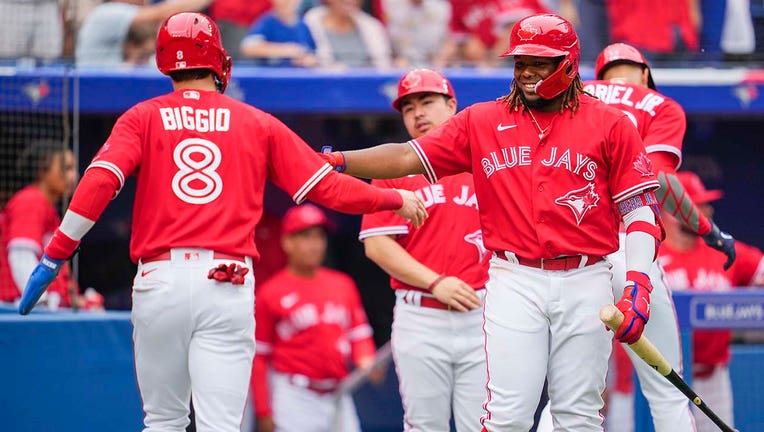 TORONTO, ON - JULY 1: Cavan Biggio #8 of the Toronto Blue Jays celebrates scoring with Vladimir Guerrero Jr. #27 against the Tampa Bay Rays in the third inning during their MLB game at the Rogers Centre on July 1, 2022 in Toronto, Ontario, Canada. (P

Playing at home on Canada’s national holiday for the first time since 2019, and dressed in special red jerseys and caps, the Blue Jays delighted a crowd of 44,445 by winning for the fourth time in five games.

Lourdes Gurriel Jr. went 3 for 3 with a solo home run and also walked. Cavan Biggio was 2 for 2 with two doubles and two walks, and also scored twice.

Seven of Toronto’s 11 hits were for extra bases.

After allowing 14 earned runs over his previous two starts, Berríos was better against the Rays. The right-hander gave up two runs and eight hits in five innings to earn his first victory since June 10 at Kansas City.

Biggio’s one-out double in the third was a drive to left-center that hit off the glove three-time Gold Glove winner Kevin Kiermaier, activated after missing eight games because of a sore left hip.

Tampa Bay’s Harold Ramírez cut it to 5-2 with an RBI double in the fifth but George Springer hit a two-run single off David McKay in the sixth and Guerrero added an RBI grounder to give the Blue Jays some breathing room.

Gurriel homered off McKay in the seventh.

Rays: Kiermaier went 1 for 2 with a single and walked twice in his return.

Blue Jays: 3B Matt Chapman (rest) was held out of the starting lineup but came on defensively in the ninth.

Tampa Bay optioned OF Luke Raley and LH Ryan Yarbrough to Triple-A Durham and recalled McKay from the taxi squad.

Fans joined together in an impromptu rendition of O Canada as the Rays batted in the ninth inning.

The Rays and Blue Jays play a doubleheader Saturday, one of two they’ll play in Toronto this season to make up for April games cancelled by the lockout. LHP Shane McClanahan (8-3, 1.77) will start Game 1 for Tampa Bay, with RH Drew Rasmussen (5-3, 3.41) expected to be activated off the IL to start Game 2. RH Kevin Gausman (6-6, 2.93) is expected to start one game for Toronto Saturday, but the Blue Jays haven’t said which. RH Thomas Hatch (4-4, 5.12 at Triple-A Buffalo) is expected to be added to the roster to start the other game for the Jays.