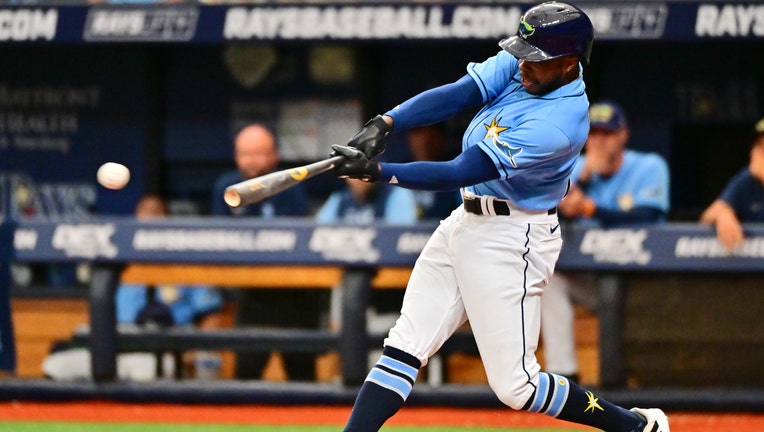 ST PETERSBURG, FLORIDA - JULY 31: Roman Quinn #25 of the Tampa Bay Rays hits a double in the second inning against the Cleveland Guardians at Tropicana Field on July 31, 2022 in St Petersburg, Florida. (Photo by Julio Aguilar/Getty Images)

Cleveland won its first series against the Rays since August 2017 and ended a long stretch of games on the road with a 6-5 record.

Reliever Kirk McCarty (2-2) allowed one run, four hits and two walks in 3 1/3 innings. Emmanuel Clase worked the ninth to get his 23rd save.

"It's just how humbling the game of baseball is," McClanahan said. "It was just one of those days where nothing was going my way. Felt like didn't have much life on anything that I threw. Didn't make the adjustments and they made me pay for it."

McClanahan's major league-best 1.76 ERA climbed to 2.07, and the lefty had his streak of going six or more innings with two earned runs or fewer stop at 13 games.

McClanahan threw 96 pitches, which was four from his season high. The four strikeouts were a season low for the ace, who is among the leaders in the majors with 158.

David Peralta, acquired from Arizona on Saturday, started in left field and went 1 for 4 in his Rays debut. Tampa Bay is 3-7 since the All-Star break.

Ryan Thompson replaced McClanahan with the bases loaded and one out in the fifth. After getting an out, he gave up the go-ahead hit to Hedges.

The Guardians went up 3-0 in the second when Myles Straw had a two-run single and José Ramírez picked up his 84th RBI with a base hit.

Tampa Bay responded in the bottom of the second when Isaac Paredes hit a leadoff double, went to third on Bryan Shaw’s wild pitch and scored the first of two Tampa Bay runs when catcher Hedges was charged with an error for an errant throw to third.

Ji-man Choi tied it at 3-3 on a fourth-inning sacrifice fly. He also had a run-scoring grounder during the second.

Kwan extended his hitting streak to 14 games on a first-inning bunt single. He also threw out Brandon Lowe, who tried to score from second on Randy Arozarena's fifth-inning single.

Peralta wore wearing No. 6, while INF Taylor Walls switched from 6 to 0. Peralta said 6 was his first big-league number and that he will talk with Walls to "take care of him" for giving up the number.