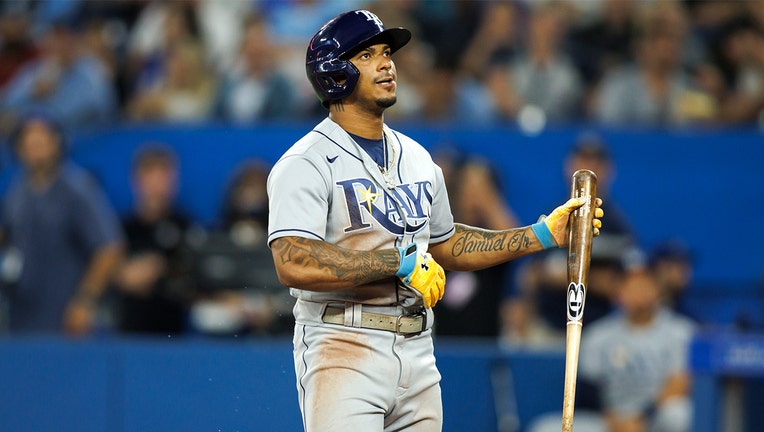 TORONTO, ON - JUNE 30: Wander Franco #5 of the Tampa Bay Rays watches his ball as he hits a foul ball in the eighth inning of their MLB game against the Toronto Blue Jays at Rogers Centre on June 30, 2022 in Toronto, Canada. (Photo by Cole Burston/Ge

Kikuchi (3-4) allowed one run and four hits in his longest outing since his previous win, May 16 against Seattle. He went 0-3 with a 7.30 in the seven starts between victories.

"It feels great," Kikuchi said of his strong start. "Especially the three or four past outings obviously weren’t great. I understand the position I put the team in, a lot of stress on the bullpen. I’m just really happy to be able to contribute."

Kikuchi said he made some adjustments to his delivery after watching film between starts. Manager Charlie Montoyo praised Kikuchi for commanding his fastball.

"If he throws strikes, he’s going to get people out, and he’s going to strike out people," Montoyo said. "That’s what he did tonight."

Hernández hit his eighth homer in the second, and Espinal went deep in the seventh, his sixth. Both homers came off Rays left-hander Ryan Yarbrough (0-4). Hernández went 3 for 4, also with a double.

"We’re not doing ourselves any favors by not making the most of some opportunities," manager Kevin Cash said. "We’re just not putting enough pressure on pitchers."

Rays left-hander Jeffrey Springs had been set to start against Toronto on Thursday but instead left the team and was put on the Family Medical Emergency List.

Right-hander Matt Wisler opened in place of Springs, and Yarbrough, who was recalled from Triple-A on Thursday, replaced Wisler in the second. Yarbrough allowed four runs and eight hits in 5 1/3 innings.

Four of the final five batters Yarborugh faced reached base, including Espinal’s homer.

"A bitter way to end it," Yarbrough said.

Cash said he wasn’t sure when Springs would rejoin the team.

Rays infielder Isaac Paredes hit a solo homer in the fourth, his 11th.

Trent Thornton worked the seventh, David Phelps handled the eighth and Adam Cimber finished for his fourth save in seven chances.

Two of the four hits off Kikuchi came when Yandy Diaz and Wander Franco had back-to-back singles to begin the sixth. Blue Jays third baseman Matt Chapman started a 5-3 double play, then made a fine play on Randy Arozarena’s grounder to end the threat.

Chapman ran into foul territory down the left field line to retire ​​Francisco Mejía for the final out of the seventh, stranding the tying run at third.

"He’s as good a defensive player as there is in baseball," Cash said of Chapman. "Not just at third, anywhere. The impact that he has on the game defensively is pretty spectacular."

Rays: OF Kevin Kiermaier (left hip) worked out before the game and remains on track to come off the injured list Friday, Cash said.

Before making their first trip north of the border, the Rays put LHP Brooks Raley and RHP Ryan Thompson on the restricted list and added RHP Javy Guerra and RHP Phoenix Sanders from Triple-A. Unvaccinated players cannot enter Canada, and teams have been ordered to place them on the restricted list, where they are not paid and do not accrue major league service time. The Rays also added RHP Dusten Knight and RHP David McKay to the taxi squad.

Toronto has hit at least 100 home runs before the All-Star break for the 13th straight season (excluding 2020).

The three-run margin snapped a streak of 14 consecutive Rays games decided by two or fewer runs.