The Hype for the Brady Bowl, Tom Brady's return to New England, has been building since he signed his name on a Buccaneer contract 18 months ago. Don't think Tom Brady losing his voice means he's gotten caught up in talking about playing against his past.

TAMPA, Fla. - Reporters who covered Tom Brady for two decades in New England rarely expected anything enlightening or entertaining to emerge from the quarterback's mouth. Keep to the straight and narrow, reveal nothing about yourself or your team, and just win.

So when Brady began cracking wise as a Tampa Bay quarterback and, once again, as a Super Bowl MVP, people took notice. One media member even noted: "Hey, he's funny."

And then Brady, perhaps a bit inebriated, chucked the Lombardi Trophy from one boat to tight end Cameron Brate on another during the Buccaneers' victory celebration, well, the video nearly broke social media.

As Brady returns to Gillette Stadium on Sunday night, it's not the same guy, almost as calculated as his coach, who left after the 2019 season. Make no mistake, he's still the quarterback no opposing team wants to face. But now, more relaxed, more personable and, yes, more relatable than ever, Brady just might be a more dangerous opponent than ever.

"I think it changed with him going to Tampa and him just getting older," said former teammate Tedy Bruschi, a standout linebacker in New England. "I don’t think this Tom was possible the first five or 10 years in New England. He was so entrenched in becoming who he is now.

"He sees a different perspective of other things that are important in your life. He's married, his kids are getting older, he has developed his personality more outside the facility and outside the stadium and all the meetings. He's having fun, with his life more in focus." 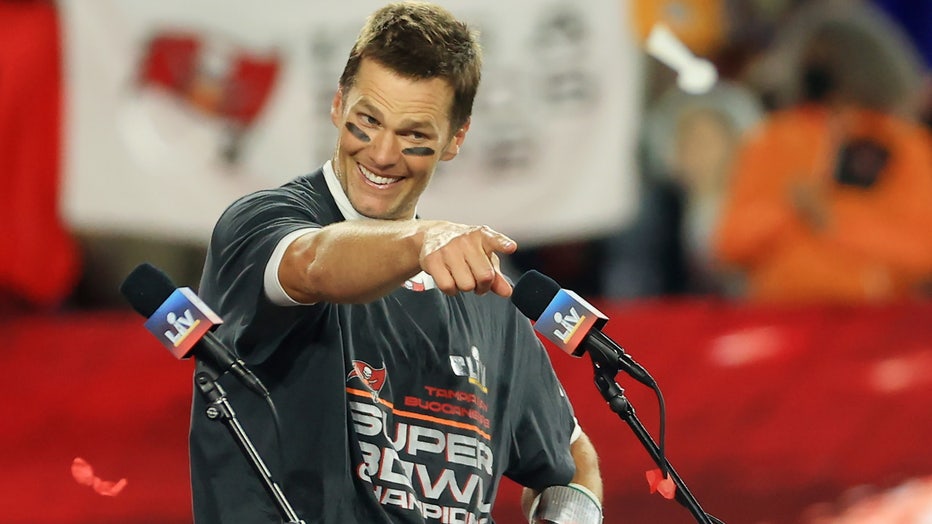 While it's difficult to picture Sunday night's game being particularly comfortable for Brady — such visits tend to be gut-wrenching for stars; just ask Brett Favre or Peyton Manning — he's not likely to fret over it. Why? Because of all he has learned and processed through his two-plus decades in pro football.

And because that has shaped the current Tom Brady. Always the perfectionist on the field, often in a cold-blooded manner, he's now presenting himself as more approachable, more communicative, more, yes, human.

"That new side I think would only have come out if he had won another championship," Bruschi said. "I say that is the only way he would truly believe there is more than one way to do something is by doing it again — in a different way.

"The success he had last year, it validated his thought of there is more than one way to do things and it doesn’t have to be this way all the time."

The Buccaneers' quarterback gets some laughs from the president during the team's trip to the White House.

RELATED: Losing his voice cuts down on Brady's talk about 'The Return'

Brady also has become quite the pitchman, a leading endorser of nine companies: Subway Restaurants; T-Mobile; Fanatics; Under Armour; Christopher Cloos sunglasses; IWC watches; Religion of Sports; Autograph, an NFT platform; and FTX, a crypto currency exchange for which he and wife, Gisele, have done commercials.

Plus, he has a weekly SiriusXM Radio program he cohosts with Larry Fitzgerald on which Brady talks about everything from touchdown passes and Super Bowls to, well, NFTs and crypto.

His sense of humor and willingness to poke fun at himself — something his longtime rival Peyton Manning has excelled at publicly for decades — have shined a new light on Brady's personality. Dour no more, he's even a tad goofy, particularly in his ads for Subway and T-Mobile.

"It’s a sandwich. I ate a lot of Subway in college. I kind of lived on Subway sandwiches in college," he said. "We used to have these little chip cards that the coaches would give us when we didn’t have training tables. It was good when my buddies worked there because we would get a little extra meat on there and it was pretty cool. It was kind of part of my past and part of my future. Hopefully people like that advertisement."

Asked if his emerging personality is due to getting older or the change in environment from the "Patriots way" to the far more open "Arians way," Brady admitted, "I think all of the above."

"It’s nice that I’ve found my voice more," he added. "I really enjoy being around my teammates, my coaches. It’s been a different environment. I’m just really enjoying the experience of playing football, playing with this group of guys."

Which, of course, includes Rob Gronkowski. The happy-go-lucky, do-anything tight end was that very rare player who acted himself in New England. If Gronk rubbed off on Brady there, it was barely detectable.

Now? Gronk is still the comedian of the duo, but Brady has shown some humorous touches — far more than as a Patriot.

So much so that Bruschi has a suggestion nobody would have presented in 2019.

"It's like Tom is saying, `Hey Peyton, I can do this better than you,'" Bruschi says with a laugh, referring to Manning's seemingly constant presence on the airwaves. "When Tom Brady retires he will get his own."