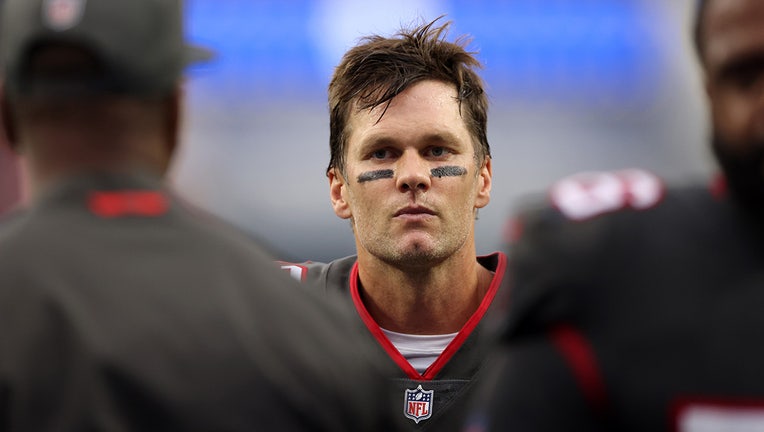 Tom Brady following the 34-24 loss to the Los Angeles Rams at SoFi Stadium on September 26, 2021 in Inglewood, California. (Photo by Harry How/Getty Images)

Tom Brady will return to Gillette Stadium on Sunday for the first time since leaving New England to join the Tampa Bay Buccaneers but the seven-time Super Bowl champion says that this is not time to "reminisce."

Brady, 44, knows better than anyone what it’s like to play in Foxborough but during an episode of the "Let’s Go!" podcast with Jim Gray, he said this weekend’s game against the Patriots will be a first for him.

TOM BRADY’S DEPARTURE ‘WASN’T A QUESTION OF NOT WANTING HIM,’ BILL BELICHICK SAYS

Brady signed with the Buccaneers in March 2020, after 20 seasons and six Super Bowls wins with the Patriots – arguably the greatest run in football history, maybe even sports history. But the veteran quarterback wasn’t done just yet. Reports at the time indicated that the two sides couldn’t agree on a long-term contract and the Bucs jumped at the opportunity to sign Brady – winning the Super Bowl that same year.

Head coach Bill Belichick addressed the situation on Monday, saying it was never "a question of not wanting him."

"He looked at his options and made his decision. We weren’t as good an option as Tampa, so I mean, you’d have to ask him about all of that," Belichick said.

Brady said he wouldn’t call Sunday’s game a "homecoming," well aware that fans’ loyalties lie with their teams. He also said that his focus will be on the game – he’ll have plenty of time to "reminisce" later on.

"I'm not going to necessarily reminisce. I don't think this is the moment for that. I'll have plenty opportunities to reminisce about my football career – none of it, none of which I really care to do right now because I'm so much in the moment," he said.