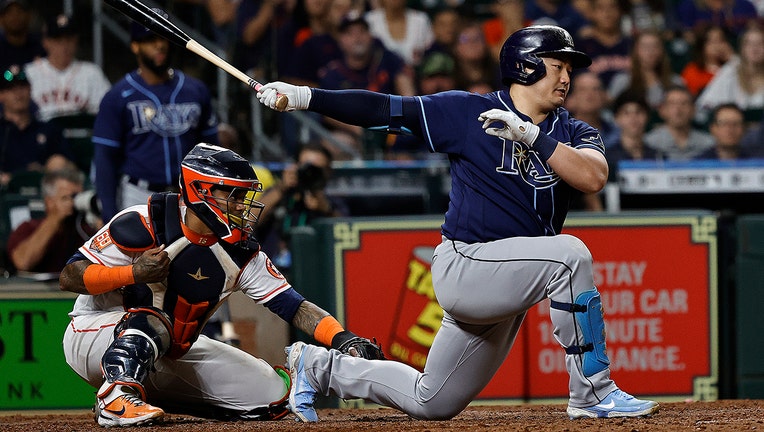 HOUSTON, TEXAS - OCTOBER 01: Ji-Man Choi #26 of the Tampa Bay Rays strikes out in the ninth inning against the Houston Astros at Minute Maid Park on October 01, 2022 in Houston, Texas. (Photo by Bob Levey/Getty Images)

It’s the 103rd victory for the American League-leading Astros. They are tied with the 2018 team for second-most wins in franchise history behind the 107 piled up in 2019.

Javier (11-9) allowed two hits and struck out seven to extend his scoreless streak to 25 1/3 innings, which is the longest active streak in the majors.

"He was real good," manager Dusty Baker said. "He was locating his fastball, threw in a couple different sliders, threw more changeups and Maldy (catcher Martín Maldonado) directed him great through the game. I don’t think he shook him off all night that I saw. Boy, he was very good."

Closer Ryan Pressly walked consecutive batters with one out in the ninth before pinch-hitter Yandy Diaz hit an RBI single on a grounder to left field with two outs to cut the lead to 2-1.

But Pressly retired pinch-hitter Harold Ramirez on a fly ball to end it and get his 32nd save.

"It just looked like he was a little rusty because he hadn’t been out there in a few days and hadn’t been in a save situation in I don’t know the last time," Baker said. "He couldn’t find his location and didn’t have the feel on his breaking ball but he made his pitches when he had to. We’ll take it any kind of way you can get it."

Jake Meyers, who had two hits, got things going with a single to start Houston’s third and he advanced to second on a wild pitch by Shane McClanahan. Meyers moved to third on a sacrifice bunt by Maldonado before Jose Altuve walked.

Jeremy Pena put Houston up 1-0 on an RBI single. Yordan Alvarez then grounded into a forceout that left Pena out at second base.

A second wild pitch by McClanahan allowed Altuve to score and extend the lead to 2-0.

Rays manager Kevin Cash was disappointed in the wild pitches.

"We’ve got to do a better job of executing in those moments," he said. "Good teams are going to take advantage, and they did."

The Astros had a chance to add to the lead in the fifth inning when Maldonado singled with one out before a double by Altuve. McClanahan then struck out Pena before retiring Alvarez on a long fly ball for the third out.

There were two outs in the sixth inning when Peralta hit an infield single for his 1,000th career hit. Randy Arozarena was out on a fly ball to end that inning.

Ji-Man Choi doubled with one out in the seventh inning. But rookie Hunter Brown retired the next two batters to leave him stranded.

Astros: RHP Josh James had surgery on his right forearm this week. Baker said he did not have a timetable for his return.

Pressly extended his career-high with his 32nd save Saturday. He has converted 10 straight save opportunities since Aug. 9.

His 32 saves rank fourth in the AL this season.